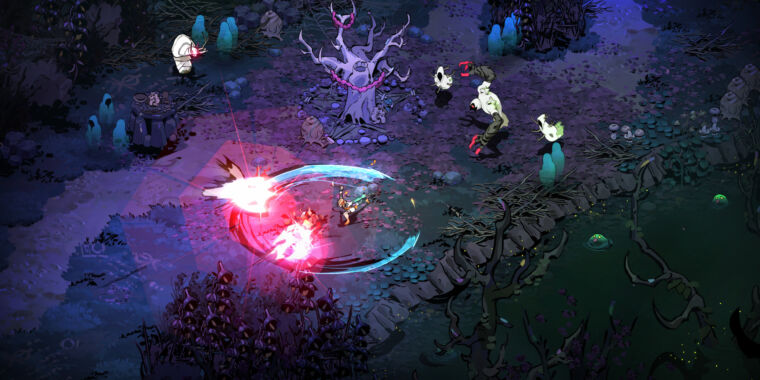 Thursday night’s annual presentation of The Game Awards was ostensibly about recognizing the best games that came out in the last year, and titles like God of War: Ragnarok and Elden Ring ended the night as big winners. But anyone who’s watched any of the annual Geoff Keighley-led award presentations in the past knows The Game Awards aren’t really about the awards. They’re all about the countless “World Premiere” trailers and announcements for upcoming games coming in the next year and beyond.

In that spirit, we present Ars Technica’s first ever “The Game Awards” Awards. The below list comprises our picks for the most exciting, interesting, confusing, or otherwise noteworthy trailers of the night, all presented without the need to sit through over three hours of awards show padding. Best of all, we get to make up the categories as we go, ensuring we can give a prize to any worthy trailer we want.

So, without further ado, onto the awards:

Supergiant Games’ short history has only featured four games so far, and all of them have been instant classics, from 2011’s Bastion to 2020’s Hades. What none of them have been, though, is sequels; Supergiant tends to start from scratch each time, crafting a new, strikingly original game from the ground up. So when a trailer for a proper Hades sequel popped up at The Game Awards, it was easily the night’s most pleasant surprise.

This time around (according to an accompanying FAQ) you’ll be controlling Melinoë, a princess of the underworld who’s trying to stop Chronos, the seemingly unstoppable Titan of Time itself. The settings and basic gameplay look awfully familiar in this trailer, even for a sequel. Then again, when you’re making a follow up to our favorite game of 2020, maybe you don’t need to change all that much.

Even without the introductory text screaming that it’s “from the creator of Bioshock,” it would be easy to clock Judas as a spiritual successor to Ken Levine’s popular franchise. Everything about this trailer screams “BioShock in space,” from characters who can “load” flame powers into the back of their hand to the use of recontextualized folk music and old-timey scenery design to set the mood.

The trailer ends with a message of “Fix what you broke,” and doesn’t give a whole lot of context for what exactly that means. But the quick cuts between gameplay scenes feature enough heavily mechanized robots, destroyed space transports, and vaguely steampunk weaponry to pique our interest. Now that we’re approaching ten years since Bioshock Infinite, we’re eager to see what Ken Levine and his new team at Ghost Story Games can pull off in this totally new setting.

The “Keep On Keeping On” Award

Back in 2017, the trailer for the original Death Stranding left us scratching our heads at what the hell we had just seen. And when we finally got to play the game in 2019, we can’t say out confusion was reduced by all that much.

The DS2 trailer starts off a little more comprehensible, with a scared mother figure cradling a baby as she tries to escape a shadowy threat on some sort of motorized unicycle. After she’s knocked down by a bullet, dropping the baby on the ground, we cut over to Death Stranding protagonist Sam Porter Bridges, watching a huge metal hover-fortress rise up from the black muck. “It’s time for you to hit the road and start a new journey,” we hear.

Seems relatively straightforward for Kojima, and despite the utter perplexity of the first game, we still somehow can’t wait to see what wild ridiculousness he has in store for us this time around.