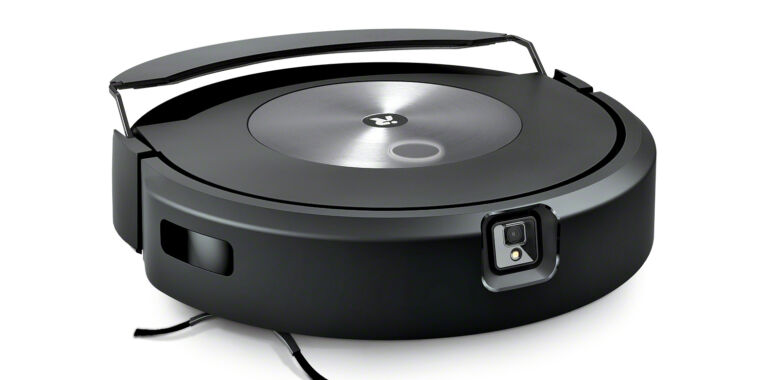 iRobot—soon to be owned by Amazon—is announcing a flagship Roomba with a new feature: It can vacuum and mop simultaneously. Meet the Roomba Combo j7+, a $1,100 combo cleaning robot that ships on October 4.

iRobot is not doing a ground-up redesign of the j7+ series to add mop functionality. In fact, the update almost looks like a retrofit. The new j7 looks just like the old j7 with a camera in the front, a big dust bin in the back, and a bottom layout that is almost identical to the old bot. There’s a new dust bin and… is that a rear spoiler?

The mop functionality lives on the top (yes, the top) of the j7+, which has a big rear cutout now. The top of this cutout is plastic, and the bottom is the wet mop pad, which is connected to the robot by two side arms. When it’s time to do some mopping, a dramatic, Transformers-like transition occurs. Two flaps on the side of the Roomba open up, revealing that the top mop cutout is actually connected to the robot by a pair of swing arms. The cutout section on top of the robot is lifted up and swings down and under the robot in a big, 180-degree motion. Now you’re dragging a wet mop pad across the floor with minimal changes to the layout of the j7+.

It doesn’t sound like the j7+ will provide iRobot’s top-of-the-line mopping experience, which will still belong to the purpose-built Braava Jet M6. iRobot’s dedicated mop bot beats the j7+ because about 50 percent of the Braava’s body is a water tank, and it has a front water sprayer. The j7+ has a redesigned dust bin that is now a dust and water combo tank. The dust area is smaller to make way for a 210ml water tank. That means way less dust capacity, but that doesn’t really matter since the Roomba will just visit the base station to get cleaned out anytime the bin is full.

The state of the art in combo cleaning robots is probably the $1,400 Roborock S7 MaxV Ultra or $1,550 Ecovacs Deebot X1 Omni, both of which have a dust bin and water tank in the robot, along with a giant base station that empties the robot of dust, fills it with fresh water, and then washes the mop and stores the wastewater in a separate tank. iRobot has a long way to go to catch up to that.

The swing-arm setup looks cool, but you have to wonder about its longevity. These robots take a lot of abuse by bumping into everything and constantly dealing with dust—it’s just the nature of the job. That large motion requires a ton of small moving parts and tiny pivot points. Something like a Roborock, by contrast, just has a mop permanently affixed to the bottom of the robot, and the mop setup is on a variable-height suspension, so it can be lifted up slightly to avoid touching carpet. That works for thinner carpets, but if you have a serious pile going on, the robot can sink down too far and get your carpet wet. iRobot says the swing arm setup is designed to avoid that.

iRobot’s press release throws some shade at the competition, saying, “Other 2-in-1 mops lift only a few millimeters—if at all—and, as a result, can leave wet messes on many carpets or rugs. The Roomba Combo j7+ is the only 2-in-1 with a mop that lifts itself to the top of the robot, completely away from carpet and rugs. Two fully retracting, durable, metal mop arms raise the mop pad when the robot senses carpet and rugs, preventing unwanted wet messes.”

The new combo bot is up for preorder now.

Ars Technica may earn compensation for sales from links on this post through affiliate programs.

How to Actually Enjoy Winter Outdoors