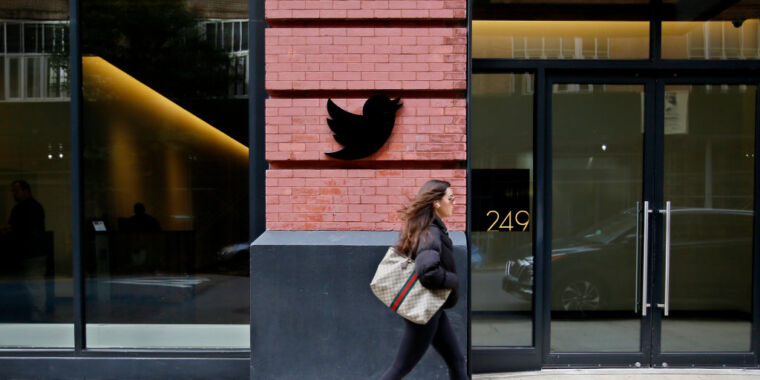 In photos taken before and after Twitter’s mass layoffs, it appeared to many that Musk’s widespread staff cuts severely reduced the number of women on Twitter staff. Now, women laid off by Twitter have filed a class-action lawsuit, alleging that Musk violated employment laws by discharging significantly more women than men.

“Women at Twitter never had a decent shot at being treated fairly once Elon Musk decided to buy the company,” the attorney representing women suing, Shannon Liss-Riordan, said in a press statement provided to Ars. “Instead, they had targets on their backs and regardless of their talent and contributions, they were at greater risk of losing their jobs than men.”

Lead plaintiffs in the class-action lawsuit are Miami-based Carolina Bernal Strifling, who worked at Twitter for seven years, and California-based Willow Wren Turkal, an engineer who joined Twitter in 2021 after four years at Facebook and LinkedIn. They’re suing Twitter “on their own behalf and on behalf of other female Twitter employees across the country who have been discharged or constructively discharged from their jobs during the chaotic weeks since multi-billionaire Elon Musk purchased the company.”

Musk’s own tweets are cited in the complaint as evidence of alleged sexism at Twitter. The complaint points to one tweet Musk deleted, naming a school using the acronym “TITS,” as well as a more recent tweet, where the billionaire said, “Testosterone rocks ngl.” The complaint also links to media reports from PC Mag and Futurism discussing the impact of Musk’s alleged misogyny on women who work for him.

Alleging that Musk’s layoffs violated Title VII protections prohibiting discrimination on the basis of sex, women suing have requested a jury trial. They are seeking “lost back pay, front pay, lost benefits, bonuses, and equity, as well as emotional distress damages, punitive damages, interest, and any other appropriate relief.” They also want the court to require Twitter to reinstate female employees who wish to return to work.

On top of allegedly laying off more women than men, the class-action lawsuit alleges that Musk has discriminated against female employees in other ways.

The complaint alleges that when Musk asked employees to agree to work in the office 24/7 or else voluntarily leave their jobs, “Musk would certainly have known that these policy changes and expectations would have a disproportionate impact on women, who are more often caregivers for children and other family members, and thus not able to comply with such demands.”

On the same day the women filed their class-action lawsuit, disabled employees and employees taking family or medical leave hit by layoffs also filed a class-action suit, represented by Liss-Riordan. Their complaint alleges that Twitter violated the Americans with Disabilities Act and the federal Family and Medical Leave Act.

Lead plaintiffs in that complaint are California-based Dmitry Borodaenko, who joined Twitter in 2021 after four years at Facebook, and Abhijit Mehta, a Twitter engineer since 2017 who, according to their LinkedIn profile, was the founding engineer lead for Twitter Blue. They’re suing “on behalf of employees who have taken or planned soon to take a family or medical leave, as well as disabled employees who can perform their jobs with or without reasonable accommodation but who were not permitted to continue their jobs, either through termination or forced resignation after being required to accept working under unreasonable circumstances for an employee with a disability.”

Borodaenko has a disability that puts him at extra risk of health complications if he contracts COVID-19. The complaint says he was assured when he was hired in 2021 that “he would always have the option to work remotely,” but Musk’s takeover changed those terms. After Musk required all employees to return to the office, Borodaenko sent an email to his manager, explaining, “In case I didn’t mention it before, as [a] cancer survivor I’m at extra risk from Covid (it also counts as a disability), so I’m definitely not working from [the] office until the pandemic is over.”

Shortly after sending that email, Twitter human resources notified Borodaenko that he was laid off, with allegedly no explanation other than: “Your recent behavior has violated company policy.”

In Mehta’s case, after his wife became pregnant, he had previously gotten family leave approved by Twitter management, set to start this upcoming December 28 until next May. Instead, Mehta was laid off, which shocked him.

“He was very surprised to hear this news, as he was a very high performer at the company, had recently received a promotion, and was working on an important project for Twitter,” the complaint says.

The complaint estimates that Twitter laid off “approximately 60 percent of employees who were on leave” at the time of the November 4 layoffs.