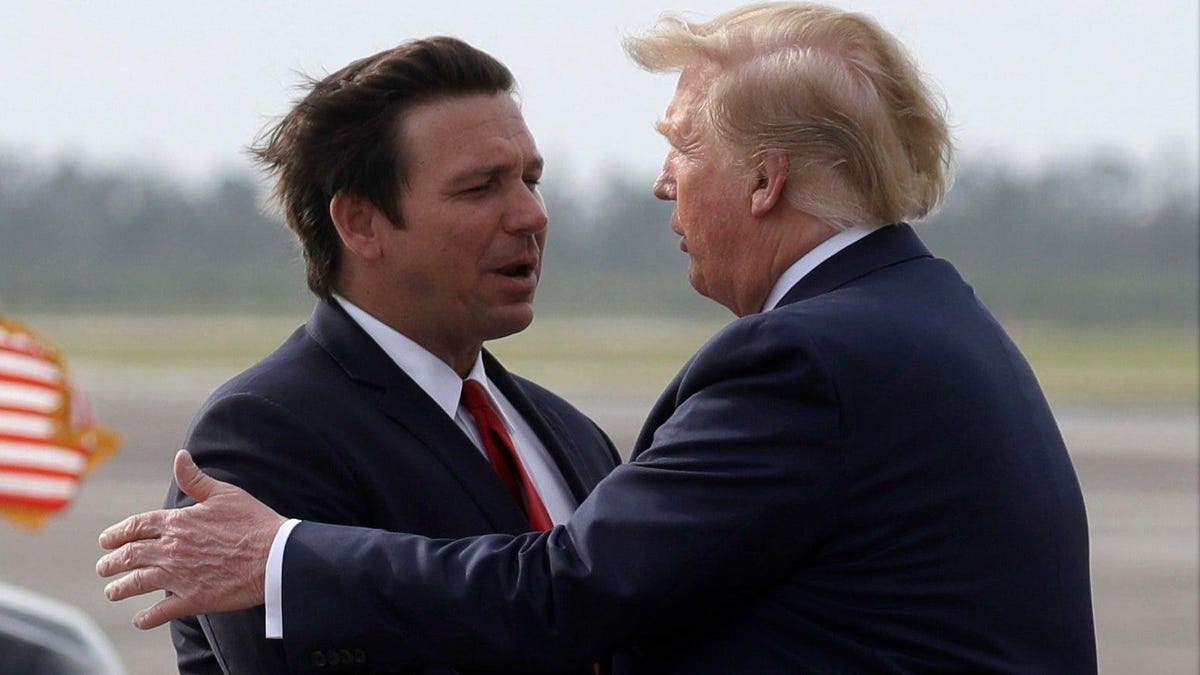 Two years goes by fast when it comes to politics. While the country is, in many ways, still recovering from the 2020 election, former President Donald Trump made his official 2024 announcement last week, and speculation on who the GOP presidential candidate will be has kicked off in earnest. Looking ahead to 2024, it’s remarkable to see what may have changed in the GOP when it comes to candidates’ messaging on climate and energy—and what has stayed the same.

The last time Donald Trump was facing off against Republican opponents, climate denial was the name of the game. In September 2015, CBS surveyed the crowded Republican field of 17 initial candidates and found that just a few accepted that climate change was happening and/or that humans played a part. Even in this sea of deniers, Trump’s soundbites and tweets on climate change—like his infamous claim that global warming was “created by and for the Chinese”—put him on the decidedly looney end of the spectrum. It’s always easy to make fun of what seem like extreme views when they’re couched in Trumpisms, and climate was no exception.

Then he got elected, and those viewpoints became actual policy. It’s difficult to overstate just how damaging Trump’s stupid opinions on science became when paired with the hammer of a longstanding GOP wishlist to roll back Obama-era climate policies. Cartoonish moves like extending the path of a hurricane with a Sharpie helped to sow doubt in science and government agencies and spread misinformation. All the while, his administration was systematically dismantling environmental protections at a federal level, carrying out an age-old Republican agenda to give favors to polluters.

Trump’s 2024 announcement speech makes no mention of climate change, but he did talk a lot about energy policy and “energy dominance,” a term his administration used often. Unlike 2016, when his outlandish claims about China were on the fringe of Republican viewpoints, this terminology became commonplace among GOP politicians and right-wing think tanks like the Heritage Foundation. Many of the talking points he laid out in this initial speech—that the Biden administration is driving up energy costs, that under GOP control America could achieve “energy independence”—are things that the GOP as a larger party is also repeating throughout the energy crisis. In other words, when it comes to climate change and energy policy, Trump’s speech is almost boring, routine—a far cry from his kookiness in 2016.

Will anyone be facing off against him? Of the potential field, Ron DeSantis—who is being floated as an early front runner, and the strongest challenger to Trump—is probably also the one with the strongest environmental record, at least at first glance. As the governor of Florida since 2019, DeSantis has had to directly contend with the impacts of climate change, and has in some ways responded aggressively, establishing a fund to help local communities adapt to and resist sea level rise in Florida. He has also made promises to oppose offshore drilling, and vetoed some bad anti-renewables policies; by Trumpian standards, DeSantis is practically Bill McKibben.

In some lights, DeSantis truly does look like the future of the Republican party: seemingly accepting that some climate change is happening and putting real resources towards mitigation and fixing some of the most egregious pollution issues. (These moves earned him praise for “go[ing] bold on climate change” back in 2019 from the Orlando Sun-Sentinel.)

Any president, some would argue, who accepts the reality of climate change and who is committed to some solutions is better than one who outright denies it. But as I’ve written before, the seeming tack towards reality from the right in recent years is nothing more than a smokescreen to allow the GOP to continue doing nothing on the causes of climate change. Outright climate denial was, after all, overwhelmingly funded and supported by oil and gas interests; those same interests have largely pivoted towards “solutions” that help them keep producing fossil fuels while portraying themselves to the general public as working to address climate change and help with the energy transition. It makes sense that the politicians they keep funding would adopt this attitude.

And for all his seemingly pro-environmental viewpoints, DeSantis seems distinctly uninterested in addressing the causes of the sea level rise. He has proclaimed that he is “not in the pews of the church of the global warming leftists,” and signed a law last year forbidding Floridian cities from totally phasing out the use of fossil fuels. He has also used similar language to Trump when it comes to fossil fuels, blasting the Biden administration for failing to “unleash American energy” by crippling domestic oil and gas—a common right-wing talking point that also happens to be extremely wrong.

The dangerous thing about Republicans moving past denial and into this faux acceptance is that it’s much harder to respond to on the campaign trail. For the past decade, calling out and shaming climate deniers in the GOP has been a strategy on the left. Yet it seems that Democrats haven’t adequately developed an appropriate response to a DeSantis-esque candidate, who may be able to trot out climate bona fides while claiming to be concerned about “energy independence.” Acknowledging that climate change is a reality while making no moves to address its core issues is barely better than flat-out denial. In fact, refusing to see that we need to phase out fossil fuels is, in and of itself, an anti-science stance. But given how Democrats themselves have only been able to pass a climate bill this year, it’s hard to see a way for them to rally enough in time to fight back against a candidate more nuanced on climate than a flat-out denier.

In the end, if the GOP manages to get its candidate in office, it won’t matter if we’ve labeled one a denier and one more reasonable on climate, or if one has put money towards sea level rise while another has drawn on a hurricane map in Sharpie. When it comes to the planet, both of their presidencies will likely be extremely similar: working to take any guardrails off for the fossil fuel industry’s continued expansion, in service of the same dark money forces that are also propelling the party’s march towards fascism. And a “moderate” like DeSantis may prove trickier to resist on his way into office.

U.S. Government Will Pay to Move Native Tribes Whose Lands Are Threatened by Climate Change