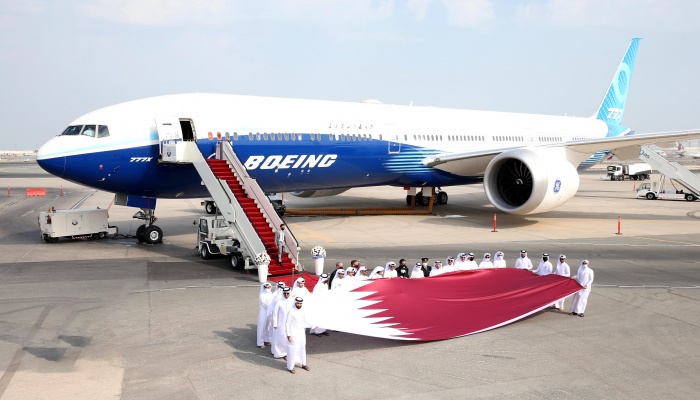 Qatar Airways has showcased its role as a global launch customer for the latest generation Boeing 777-9 aircraft after welcoming the jet to Doha International Airport.

A host of VIP guests joined Qatar Airways Group chief executive, Akbar Al Baker, to share in the arrival of the aircraft, which will remain in Qatar before returning to Boeing Field in Seattle to continue its test program.

The plane was in the Middle East as part of the Dubai Airshow.

The aircraft will be the world’s largest and most efficient twin-engine jet, delivering 20 per cent lower fuel consumption and emissions than previous generation aircraft.

Al Baker said: “It was back in 2013 that Qatar Airways Group initially announced its planned investment in the Boeing’s latest generation aircraft.

“After visiting the Boeing factory in Everett, Washington in September 2018, we had the opportunity to view the 777-9 up close in person, but today marks the first chance for the airline and our esteemed VIP guests to witness our significant commitment to this incredible aircraft here in Qatar as it arrives for the first time.

“We are tremendously proud to be a global launch customer for this industry-leading product, and to be able to showcase our commitment towards continuing to support our thriving global network with a fleet that includes the youngest, most technologically-advanced and efficient twin-engine aircraft in the world.”

These are JPMorgan’s top stock picks for December