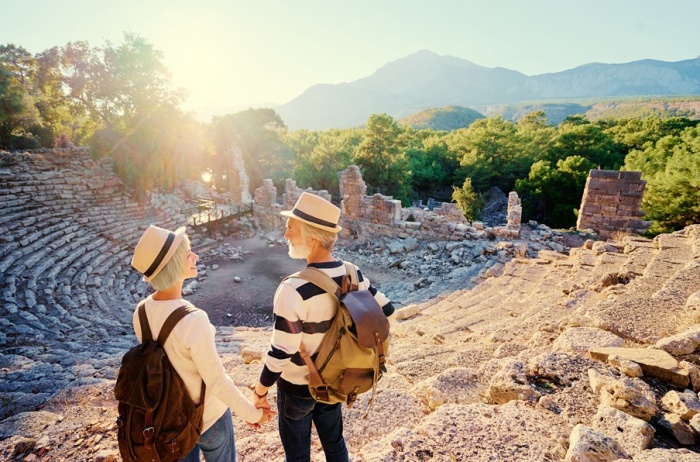 As the experts in the over-50s market, Saga Holidays asked nearly 3,000 of its customers how they expected to travel in 2023.
Fantastic experiences, solo escapes, multiple holidays a year, a huge range of destinations and some stark gender differences are set to feature. This group is also well insulated against the cost-of-living crisis and they plan to invest well in their holidays with trusted brands.

Most of those surveyed (66 per cent) said they were planning to take between two and four holidays in 2023. A huge 25 per cent also said they plan to take five or more trips in 2023. And they are forward planning with nearly six in ten (57 per cent) already having booked a trip for 2023 and a third (34 per cent) having secured more than one holiday.

The majority (55 per cent) of respondents said that the cost-of-living crisis has not affected their holiday plans. In fact, 14 per cent are planning to spend more than £5,000 per person on their main holiday for 2023.

They do expect real value for that money though, which is a focus for Saga Holidays as evidenced through its new ‘Tailor-Made Travel by Saga’ holidays, which enable travellers to build their perfect, personalised itinerary with the help of the expert in-house team. Saga and its sister company Titan Travel also offer touring holidays to hundreds of destinations with exciting experiences and flexible options included as standard; and Saga Cruises offers all-inclusive ocean and river itineraries in beautiful, boutique ships built especially for its customers.

In a multiple-choice question, an average of 61 per cent said they’ll definitely take a UK holiday in 2023, while 31 per cent of over-50s are planning a touring holiday, and 30 per cent are looking forward to an ocean cruise.

In terms of when they travel, the over-50s take full advantage of off-peak periods with September, May and June featuring as the top three months to get away, while December, November and August are the least likely.

Beach holidays are most popular with 50-to-59-year-olds with 44 per cent planning a relaxing break in the sun. This group is also most likely to want to spend time holidaying with family, whereas 20 per cent of those aged 70 and above want to meet new people.

Top long-haul destinations for 2023 are the USA, Canada and Australia, and short-haul favourites will be France, Mainland Spain and Italy, but many are also keen to visit destinations such as Japan, South Africa, Costa Rica, India, the Galapagos, Mongolia, South Korea, the Antarctic, Namibia and Botswana.

When they get to their destination, 47 per cent said the opportunity to learn about local culture, see a natural phenomenon and visit places of historical and archaeological interest was important. But, within those stats, women are keener to explore than men (51 per cent versus 43 per cent). They are also significantly more likely to take a solo trip with 29 per cent saying they plan to travel alone as opposed to just 12 per cent of men.

Other key considerations for over-50s travelling include the ease of transfer and getting around the destination (46 per cent), as well as the climate (45 per cent). Activities such as wine tasting (23 per cent) and music events (22 per cent) proved more popular than intense physical endeavours, and 43 per cent want flexibility on holiday, saying they like to have a mix of things organised in advance, as well as some downtime to fill as they choose.

“Our Saga 2023 travel trends research shows some real differences in how our experienced customers want to travel. And yet, people over 50 often get banded together as one group in a way society doesn’t do with any other ages. Recognising customers as individuals with different ambitions and travel plans means offering choice, flexibility and a host of incredible experiences, be that on a personalised safari of Botswana, a rail journey across the Rockies, a tour of the Golden Triangle, or a cruise around the Caribbean.”