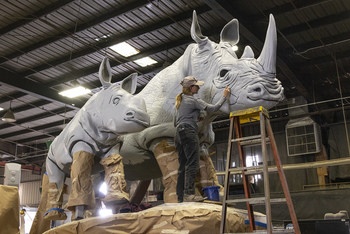 Secure on her 4-foot legs, is Msituni (pronounced see tune neee), an 11-month-old giraffe born at the Safari Park. Born unable to walk, a condition in which she would not have survived in her native habitat, she required months of critical around-the-clock care, along with several pairs of custom giraffe-sized orthotic leg braces, to support her while she gained the necessary strength to walk. Today, after making a full recovery, Msituni runs alongside dozens of giraffes, wildebeest, impalas, rhinos, and Cape buffalo in the Safari Park’s African savannas.

A pair of African crowned cranes meander through lush landscapes, as Msituni’s parents peek with curiosity into an open-air safari truck filled with guests. The riders are wildlife care specialists, veterinarians and conservation scientists from the Safari Park who have dedicated their lives to caring for Neville, Msituni and countless other species in San Diego and around the globe. They are joined by the Safari Park’s Executive Director, Lisa Peterson, and expert wildlife guides from the Safari Park. Representing how a moment at the Safari Park can change a lifetime, are four young children who may aspire to be the next generation of conservationists, surrounded by the wonders of wildlife and intricate beauty of nature.

The planned floral array on the float will illustrate that both the San Diego Zoo Safari Park and San Diego Zoo are accredited botanical gardens that feature over 2 million plants—and serve as a reminder of San Diego Zoo Wildlife Alliance’s dedication to plant conservation through its many efforts, including the Wildlife Biodiversity Bank.