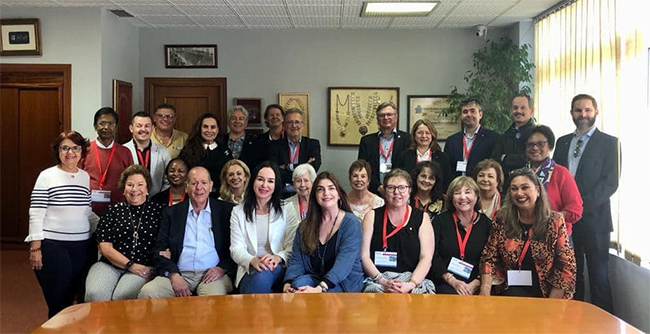 Skål International Executive Board and International Council held their annual Mid-Year meeting between April 27-30th in Torremolinos, Spain. They celebrated World Skal Day on the 28th of April.

Skål International World President Burcin Turkkan officially welcomed the Executive Board and International Council members to their meetings and a final joint meeting between the Board and Council.

International Council President Julie Dabaly joined the Executive Board in their meetings and led the Council in three days of agenda-packed meetings where several local government officials attended to support the organisation.

“As an organisation, we are constantly searching for updating and optimising ourselves for the benefit of our membership.” said worldwide president Burcin Turkkan as they discussed the industry’s challenges in post-pandemic times.

‘Together we are stronger as one’ is president Turkkan’s theme for the year as she calls for all members and industry partners to work jointly towards the full recovery of the tourism industry.

Skål International Day was also celebrated during the 3-day meetings, and a live message was delivered on two time zones by president Turkkan and her entire board together with the International Council. She also participated live via zoom-in celebrations and new membership inductions held in other parts of the world, sharing her message of unity.

Colon cancer: the ‘silent killer’ that claimed the life of Kirstie Alley and 53k more this year