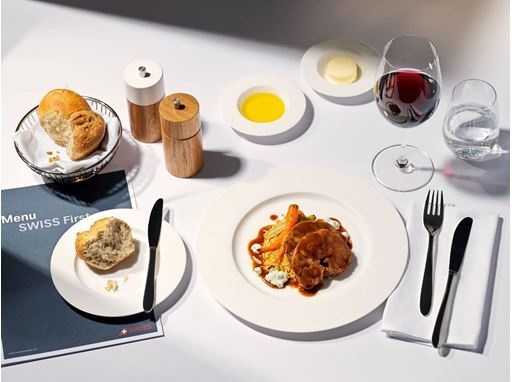 Swiss International Air Lines (SWISS) is now serving its First and Business Class travellers culinary creations from the high-end After Seven restaurant in Canton Valais. The Michelin-starred establishment is part of the Backstage Hotel, which comprises 20 luxury chalets and apartments set against the spectacular Matterhorn.
In charge at After Seven is managing director and executive chef Florian Neubauer – a byword for innovative cuisine, the youngest chef in Europe to earn two Michelin stars and the present holder of a combined 32 GaultMillau points. From today and for the next three months, premium travellers on SWISS long-haul flights from Zurich will enjoy Neubauer’s creations featuring specialities of Canton Valais in the latest chapter of the ‘SWISS Taste of Switzerland’ inflight culinary programme.

“SWISS and After Seven share the same premium philosophy, and derive the same sheer pleasure from pampering their guests,” says Julia Hillenbrand, Head of Brand Experience at SWISS. “We both attach huge importance to delivering the highest service quality. And I am delighted that, from today onwards, we can offer the culinary creations of this innovative Valais kitchen aboard our flights.”

“For me, cooking and travel are closely connected,” Florian Neubauer adds. “It’s my passion to discover the new and to play with ingredients from other countries. So I’m particularly pleased to have this opportunity to bring the varied tastes of Switzerland closer to SWISS’s inflight guests.”

SWISS has been taking the First, Business and Premium Economy Class travellers on its long-haul services on a journey of culinary discovery through Switzerland’s various regions since December 2002. Every three months a new Michelin-starred and GaultMillau-point top chef is invited to present ‘their’ canton to SWISS passengers aloft by creating a varied selection of top-quality meals with a particular focus on regional and seasonal specialities. The meals are also accompanied by wine and cheese specialities from the region concerned. In its 20-year success story to date, ‘SWISS Taste of Switzerland’ has welcomed aboard 76 guest chefs representing every one of Switzerland’s 26 cantons.