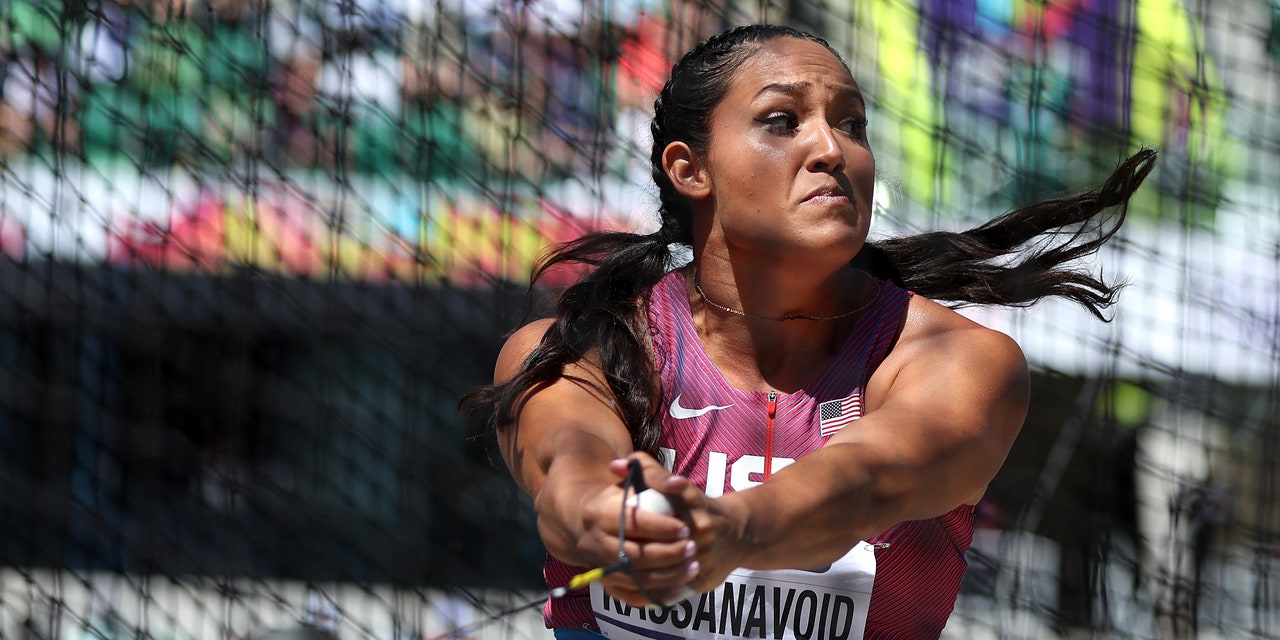 Early on in her career as a hammer thrower, Janee’ Kassanavoid learned a simple yet important lesson from her coach, Greg Watson.

The equation for power, he told her, was work over time.

Kassanavoid keeps this physics lesson in mind each time she competes in her chosen sport, which, as legend has it, originated thousands of years ago in Ireland when a Celtic warrior grabbed a chariot by its wheel and tossed it airborne. Over the centuries, the hammer throw has evolved into the Olympic sport it is today—perhaps not as recognizable as other track and field events like, say, the 100-meter dash, but still staggering in the mastery it requires to perform at the top level: Strength, precision, speed, and force remain just as important in the sport’s current day as it did in its earliest folklore iteration.

In order to perform at the pinnacle, Kassanavoid has to move quickly, precisely, and forcefully to transfer energy from the movement of her body to the weighted ball of the hammer, giving it power to travel hundreds of feet. First, she takes a deep breath, then steps into the ring. She winds up, swinging the heavy ball—the one used in competition weighs about nine pounds—several times on its long wire. Then, she spins around and around to build velocity before letting go of the grip at just the right moment to send it sailing. Her longest, personal-best throw is 78 meters, more than three-fourths the length of a football field (and the six-farthest throw, ever, in the event).

Watson’s pronouncement about power also had another meaning, one that became more clear to Kassanavoid as she progressed as an athlete. The more work she puts in each day, week, and year, the greater the payoff. With time, all that would combine into a moment that would allow her to really shine.

The road there, though, hasn’t been smooth: In college, she coped with multiple injuries and surgeries that impeded her progress. And then when things were looking up a few years later, Kassanavoid missed the Olympic team by just two inches at the 2021 US Olympic Track and Field Trials.

But in 2022, after eight years of dedicated effort, Kassanavoid has clearly come into her power.

At the World Athletics Championships in Eugene, Oregon, this summer, Kassanavoid won bronze. In doing so, she’s believed to be the first Native American woman to earn a medal at the prestigious event, as NBC Sports reported. She went on to win the NACAC (North American, Central American and Caribbean Athletic Association) Championships in the Bahamas in August.

“All I wanted was to come back completely strong and different, and be one of those athletes that was going to continue to break barriers,” Kassanavoid tells SELF. “I want to show up, I want to work hard, and I want to make history.”

As National Native American Heritage Month draws to a close this week, Kassanavoid continues working hard to make history not only in track and field, but on a broader level as well—she wants to inspire more young indigenous girls to find their own spot in sport, too. And she’s using her platform on social media, where she has amassed over 575,000 followers as @naethrowsheavyrock on TikTok, to help spread that message. By posting her successes like medal ceremonies and podium topping along with the less glamorous parts of sport (including a wipe-out or two), she takes pride in providing an inside look at the what’s involved in getting to the top. And by posting nods to her culture and heritage, she’s hoping the next generation of athletes can envision themselves there, too.

A Legacy of Strength

Kassanavoid grew up in the small town of Lawson, Missouri, with three older (and also athletic) siblings. From an early age, she dabbled in everything from cheerleading and gymnastics to soccer and softball.