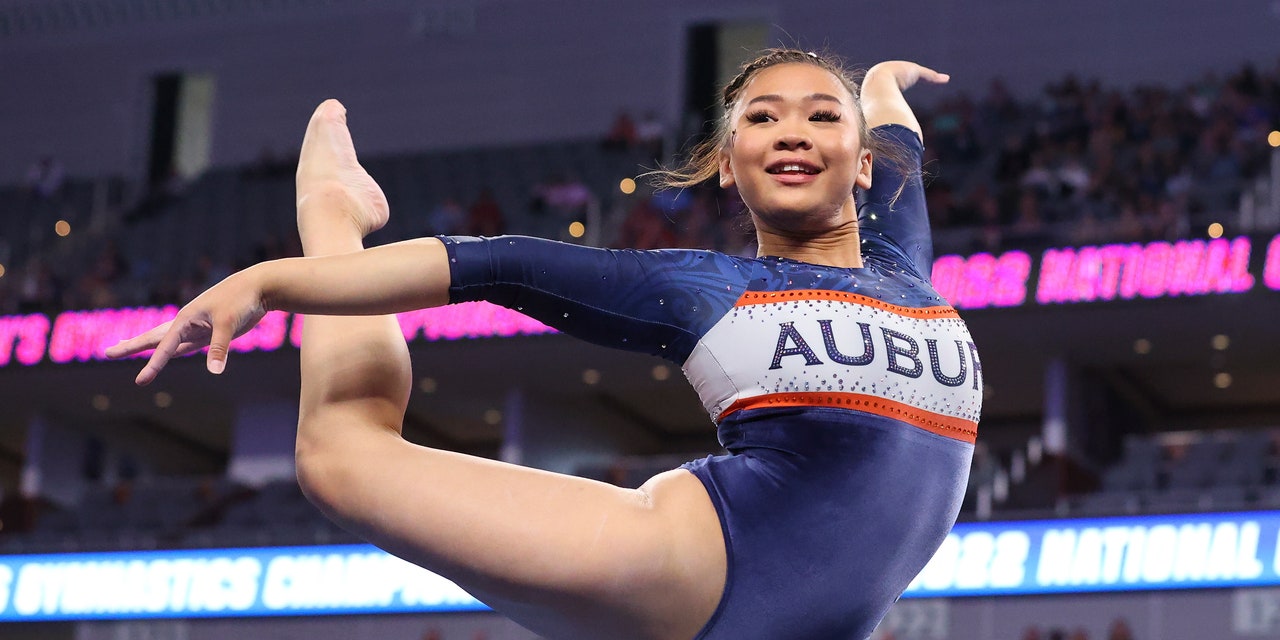 After completing her sophomore year on the Auburn University gymnastics team, Suni Lee will make the transition back to elite gymnastics—and embark on a bid to represent Team USA once again at the 2024 Olympic Games in Paris.

Lee, who became the first Asian-American to win all-around gymnastics gold at the 2020 Tokyo Games, announced her decision to leave collegiate gymnastics and pursue Olympic glory with a video posted on her Instagram account on November 15.

“I have my sights set on Paris in 2024, and I know what I have to do to get there,” Lee said in the video. “I look forward to rolling up my sleeves and putting in the work.”

Lee joined the Division I Auburn gymnastics team in the fall of 2021, just weeks after competing at the Tokyo Games, where she earned a team silver medal and individual bronze on the uneven bars in addition to her all-around gold. As a freshman at Auburn, she had the most decorated year in the program’s history, winning an NCAA championship in beam and earning runner-up in the all-around, as well as eight All-American honors.

Lee’s sophomore (and final) season at Auburn will begin in December with their annual preview meet. Season tickets to watch her perform in person have already sold out—for the second year straight.

“If you love Auburn, Auburn will love you,” Lee told SELF earlier in the fall. “They’re absolutely amazing.”

Competing for Auburn was a dream of hers, as Lee explained in her video, but the “indescribable emotion” of competing on the world’s biggest stage was something she wasn’t quite ready to walk away from. “I don’t want it to be just once in a lifetime,” she said.

If she does make a repeat, it’ll be a historic one. The path of Olympics to college followed by back to Olympics has never been done before for a female US gymnast, according to NBC Sports. (MyKayla Skinner came close as an alternate for the 2016 Games in Rio, followed by competing for the University of Utah, and then making the Tokyo team.)

Previously, competing at the collegiate level meant a retirement from the elite world. Up until around 2000 or so, college gymnastics “didn’t have that excitement and that allure” of elite competition, Betty Okino, a 1992 Olympian, told The Washington Post. In fact, according to the outlet, only one athlete from each of the last two Olympic teams prior to Tokyo competed in the NCAA.

Over the last two decades, though, there’s been a change: Major TV networks have begun broadcasting collegiate meets, schools have started selling out their venues, and spellbinding routines by college gymnasts like Nia Dennis and Katelyn Ohashi have gone viral, bringing college gymnastics to the mainstream public.

Another big reason that now makes college gymnastics more appealing to those who have competed for Team USA? Previously, the NCAA had strict rules regarding amateurism—athletes couldn’t profit off their name, image, or likeness (NIL) and still compete for the schools. That meant if an athlete soared to Olympic fame as a teen, they wouldn’t be able to do things like make commercials or accept endorsements while the iron was still hot, since it would void their college eligibility. But beginning in July of 2021, the NCAA amended its policy and suspended the prior rules, allowing athletes to benefit from their own NIL.

All of these changes in the collegiate gymnastics world means the Paris Games might be a competition like no other. According to ESPN, two other members of the 2020 Tokyo team, Jordan Chiles and Jade Carey, have already been competing simultaneously at the collegiate and elite levels—meaning there are several possibilities for an Olympic-collegiate-Olympic trajectory for Paris.

And now, Lee is throwing her name into that mix.

“I’ve always had this tiny voice in the back of my mind telling me I wasn’t done with elite and wanted to give it another shot,” Lee told ESPN. “As you near the end of an Olympic cycle and get closer to the Games themselves, training ramps up to a point where it is completely a full-time job… I know that to have the best shot to represent my country again, I need to dedicate that time, and this decision allows me to do that.”