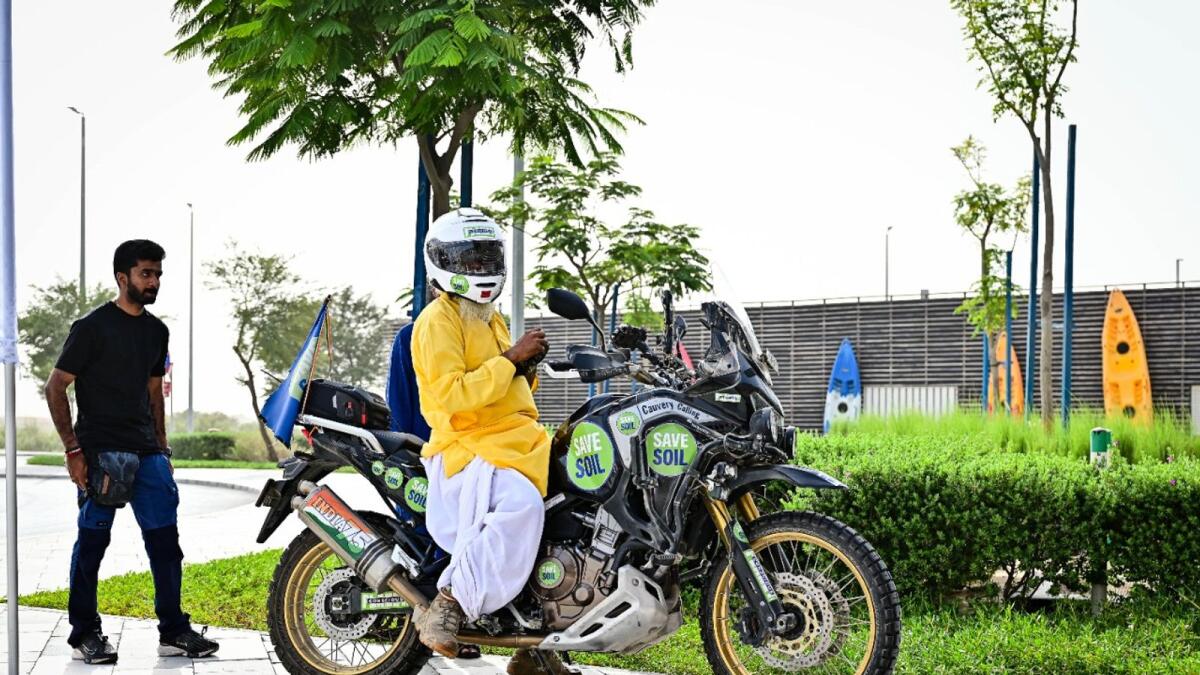 Indian global visionary leader, Sadhguru Jagadish Vaudev, who is on a 100-day ‘Journey to Save Soil’, is impressed by the UAE’s efforts in nature-based climate change solutions.

The Indian yogic is on a visit to the UAE as part of his solo motorcycle trip, which kicked off from London in March and will end at the southern tip of India, with an aim to spread awareness on the soil crisis and urging world leaders to act accordingly.

On Wednesday, the UAE’s Ministry of Climate Change and Environment hosted the spiritual leader at Jubail Island’s mangrove park in Abu Dhabi. The UAE has a target to plant 100 million mangroves by 2030, which will bring up the mangroves forest area to 483sqkm and boost the carbon sequestration rate to 115,000 tonnes per year.

During the event, Dubai-based International Center for Biosaline Agriculture (ICBA) inked a memorandum of understanding with Sadhguru’s Conscious Planet Movement to Save Soil to protect food-producing agricultural soil in the UAE from degradation. The signing ceremony was held in the presence of Mariam bint Mohammed Almheiri, Minister of Climate Change and Environment. The UAE has become the 74th country to join the movement.

As a symbol of commitment, Almheiri, Sadhguru, Indian Ambassador to the UAE Sunjay Sudhir and other top officials planted mangrove seedlings, which was organised by the Environment Agency – Abu Dhabi (EAD) in cooperation with Jubail Island.

Sadhguru mourned the loss of Sheikh Khalifa bin Zayed Al Nahyan and stressed that the vision of the UAE leadership has played a significant role in transforming the country to become a hub of the world.

Spending hours at the vast mangroves park, Sadhguru underlined that Abu Dhabi has been creating the basic ecosystem to make a rainforest in future.

“These mangroves are growing because of the necessary care, which has come from the government here. This is the life breath of this wetlands, which needs this vegetation. If you continue this vegetation, a little away, if there is space, in another 15 to 25 years, you can make a rainforest. This will set up the necessary ecosystem for that. This is fantastic. It needs to happen everywhere.”

He urged the UAE to take a leadership position on ecology in the region.

“No one imagined the UAE could become an ecological hub. It is possible that the country can become an important ecological centre. Unfortunately, the rest of the world is busy converting fertile land into desert. Put them to shame. Desert should be converted into fertile lands because it is needed in the world,” said Sadhguru, the founder of the Isha Foundation.

“I feel in many ways the UAE can take the leadership in the region. This region needs that leadership. Desert means people have given up and there is nothing that could be done here. Jubail Island is a small manifestation of what could be done in a desert.”

“They are thriving and growing, which is phenomenal.”

“On this wonderful journey, the UAE is partnering with you on ‘Save Soil’. It is such an important cause. We stand up to your visionary ambitions. We are here to support you and inspire others,” she added.

Sadhguru’s journey has spanned 27 countries, and in the next two days, he will visit Al Ain’s organic farm and attend a public event in Dubai.