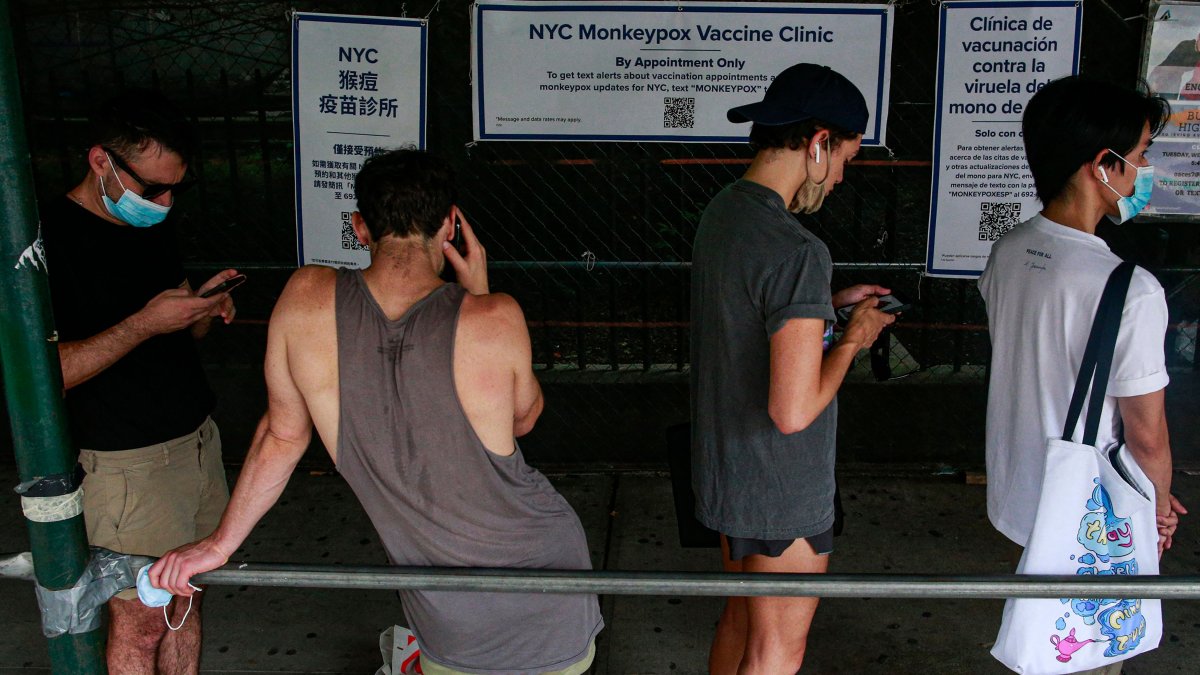 New York City’s monkeypox outbreak has now boomed to more than 1,000 cases, accounting for 30% of the burgeoning national case total — and with thousands of vaccine appointments continuously being scooped up within a half-hour of opening, the federal government is weighing more intensive action.

As of Tuesday, the CDC reports nearly 3,500 confirmed monkeypox or orthopox virus (the same family) cases across the United States. Maine, Vermont, Wyoming and Montana remain the only four states not have a confirmed case yet, though that doesn’t mean monkeypox isn’t already spreading in those areas.

New York state far and away has the most of any in the U.S., with the five boroughs of New York City accounting for 1,040 confirmed cases, according to the latest city health update.

“You want coordination among all the different agencies,” Fauci explained, and those are the aspects “that you want someone to actually coordinate all of those things to get a much better response. We’re doing well but we’ve gotta do much better.”

It comes days after the World Health Organization declared the outbreak a public health emergency of international concern, putting monkeypox on a list that also includes COVID-19, Zika, H1N1 flu, polio and Ebola. More than 14,500 cases have been reported in more than 70 countries to date, and experts say both numbers are likely significantly underreported.

Some people infected with monkeypox have faced a difficult road while seeking treatments like antiviral drugs, or even a test to confirm the disease. But why are people struggling to find the help they need? Marshall Allen, author of “Never Pay the First Bill,” joins LX News to discuss the difficulties of navigating the U.S. health care system.

The federal government has opened up the monkeypox vaccine stockpile in the last month and New York City has received nearly 30,000 vaccine doses in the last few weeks alone (about half the state allocation). It has been holding off on opening appointments until it has the supply in hand. On Friday, it opened up 17,000 appointments. They were gone in a half-hour.

The week before that, the city made 9,000 appointments available. Those were gone in 10 minutes.

At this point, eligibility in New York City is limited to “gay, bisexual or other men who have sex with men and transgender, gender non-conforming or gender non-binary persons ages 18 and older who have had multiple or anonymous sex partners in the last 14 days,” under the guidelines released by the health department. Learn more here.

While this U.S. monkeypox outbreak has disproportionately affected that population, anyone can get monkeypox.

Monkeypox vaccination is a two-dose regimen but the city has been prioritizing first doses at this point because of the supply issues. Right now, it wants to afford more people some protection, officials say. State health officials said last week the latest allocation wasn’t even enough to secure first doses for all eligible who wanted one.

A day ago, Gov. Kathy Hochul’s office announced it was expanding testing opportunities as part of its ongoing efforts around access and vaccine distribution. It approved Quest Diagnostics’ PCR test, which gives providers another option and shores up lab testing capacity, the Democrat said.

Currently, specimens can be tested at the state’s Wadsworth Center, the NYC Department of Health and Mental Hygiene, as well through private labs including LabCorp, Mayo Clinic, Aegis Sciences Corporation, Sonic Healthcare and UR Medicine Lab.

Like other tests available, Quest Diagnostics’ new PCR test uses swab specimens from patients presenting with an acute generalized pustular or vesicular rash. The new type of testing was announced by Quest in mid-July. According to New York State Public Health Law, the Department of Health was required to take additional steps to approve this new testing, with Quest Diagnostics submitting information to the Clinical Laboratory Evaluation Program (CLEP). That review is now complete.

New Yorkers can sign up for text notifications to receive alerts about monkeypox in NYC, including appointment releases, by texting MONKEYPOX to 692692 or MONKEYPOXESP for alerts in Spanish.

The city is also launching more active messaging, saying people could now receive text alerts about the virus and new appointment openings by texting MONKEYPOX to 692692, or MONKEYPOXESP for alerts in Spanish.

“New York still faces a disproportionate number of monkeypox cases, and we will continue to meet this moment with urgency and aggressive action,” Hochul said in a statement Monday. “Today’s announcement builds on our ongoing monkeypox response efforts to expand testing capacity, secure more vaccines and make resources as widely available as possible. We will continue to do everything in our power to protect New Yorkers, including our most vulnerable communities.”

The World Health Organization, WHO, on Saturday declared monkeypox a public health emergency of international concern. The designation puts Monkeypox on the same list as other other outbreaks such as, COVID-19, Zika, H1N1 Flu, Polio, and Ebola