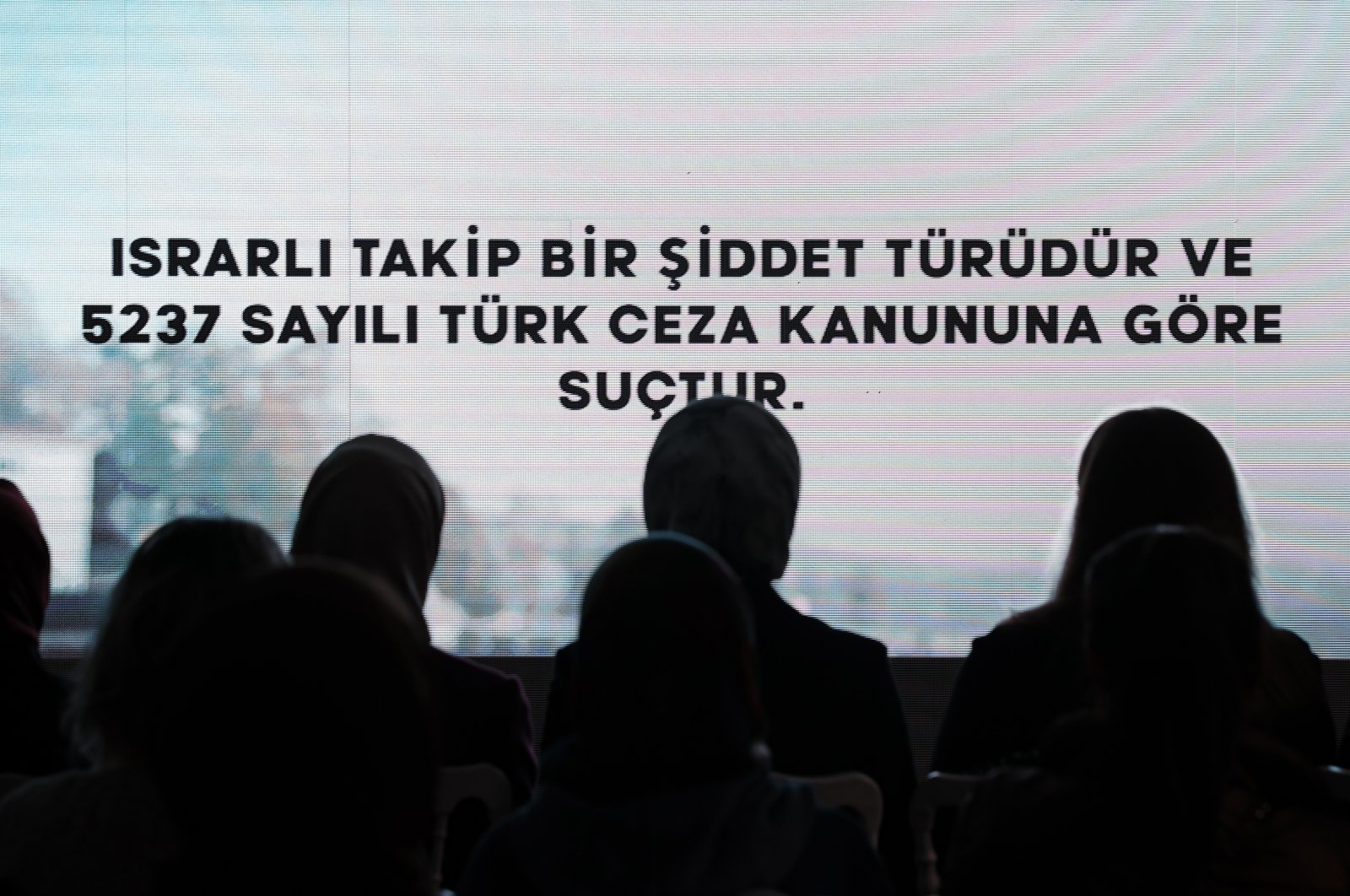 The Women and Democracy Association (KADEM) introduced a campaign that aims to raise public awareness that “stalking” is a form of violence and a crime, as part of the International Day for the Elimination of Violence Against Women marked on Nov. 25.

Speaking at the press conference held on Thursday at KADEM’s Women’s Support Center in Edirnekapı, Chairperson of the Board of Trustees of KADEM Foundation Sümeyye Erdoğan Bayraktar said, “Nov. 25 is a day when violence against women is discussed all over the world and the importance of combating violence is underlined.”

Women’s rights activists have observed Nov. 25 as a day against gender-based violence since 1981. This date was selected to honor the Mirabal sisters, three political activists from the Dominican Republic who were brutally murdered in 1960 by order of the country’s ruler, Rafael Trujillo (1930-1961).

“This year the theme of our campaign is ‘stalking.’ With the public service, we have prepared our social media content about stalking as a violation of rights, which is now included in the scope of a crime in the Turkish Penal Code No. 5237,” Bayraktar said. Emphasizing that violence against women, attacking the defenseless and trying to dominate women is unacceptable, she added that this type of violence is characterized by the imbalance of physical power and traditionally seeing women as second-class citizens. She also pointed out that many women are subject to violence by their closest relatives when they should be safe instead and cannot make their voices heard. Some are even murdered. Marking such an international day is very important for raising awareness to end this suffering, she noted.

Bayraktar explained that as KADEM, they work to build a society in which women can live with dignity, without fear and with confidence. In this context, they organize campaigns on Nov. 25 every year to address violence against women from different perspectives.

Women who have been subjected to persistent stalking, both physically and on social media, especially in recent years. It is an action that scares, disturbs and pressures women, and violates their peace and tranquility. More importantly, it becomes even more serious when stalking turns into physical violence, she explained.

Stating that Law No. 6184 on the Protection of the Family and the Prevention of Violence Against Women in Türkiye is still one of the most effective judicial measures, Bayraktar emphasized that with the new steps taken by the government, serious progress has been made on the issue of violence against women and women have achieved significant legal gains in this process.

“However, regretfully from time to time, these gains have been discredited by various groups. How possible is it for a person who has been exposed to their father’s violence and grew up witnessing these situations to build a healthy family? Combating violence against women and all forms of violence requires combating this dysfunction,” said Bayraktar.

Violence against women cannot be solved only by laws, legal regulations and penalties; instead, everyone should approach this issue in a humanitarian, moral and conscientious manner, she also pointed out.

Emphasizing that it is essential to change the mentality that supports violence in this context, Bayraktar said: “We invite every member of society to take responsibility in the fight against violence in the name of relationships in which women’s human dignity is protected, love and compassion prevail, safe families and healthy generations are supported. I believe that we will overcome this shame of humanity through punishments, with the cooperation of the state-civil society and most importantly, women and men, together.”

​KADEM Chairperson of the Board Saliha Okur Gümrükçüoğlu stated that violence against women is a phenomenon both in Türkiye and in the world and the struggle cannot be started without accepting it, attaching great importance to Nov. 25 in this sense.

“We are trying to raise awareness this year with a short film prepared by KADEM as part of the International Day for the Elimination of Violence Against Women. The 45-second film explains one woman’s feeling of being stuck and afraid after being physically and digitally followed. Screens are used as a metaphorical representation of her emotional state. The wounds inflicted on the young woman by the messages and calls received on her phone are symbolized by cracks in the glass. It’s a disturbing and threatening process from digital media via social media, and it’s a process that leads to physical violence. We tried to explain this with a short film. We aimed to raise awareness in society and increase people’s sensitivity to this issue,” she explained.

The campaign will take place with field and social media activities as well as the spot film within the scope of compulsory broadcast.

“With our slogan ‘Hold on to law,’ we will underline the negative consequences of mitigating, ignoring or staying silent about this action. Displays will be made on billboards and digital screens across the country,” she said.

In addition, the message ‘Hold on to law’ will be displayed on the sides of public vehicles, especially in Istanbul.

Young KADEM volunteers will also be on the street flying balloons to draw attention to the importance of the law.