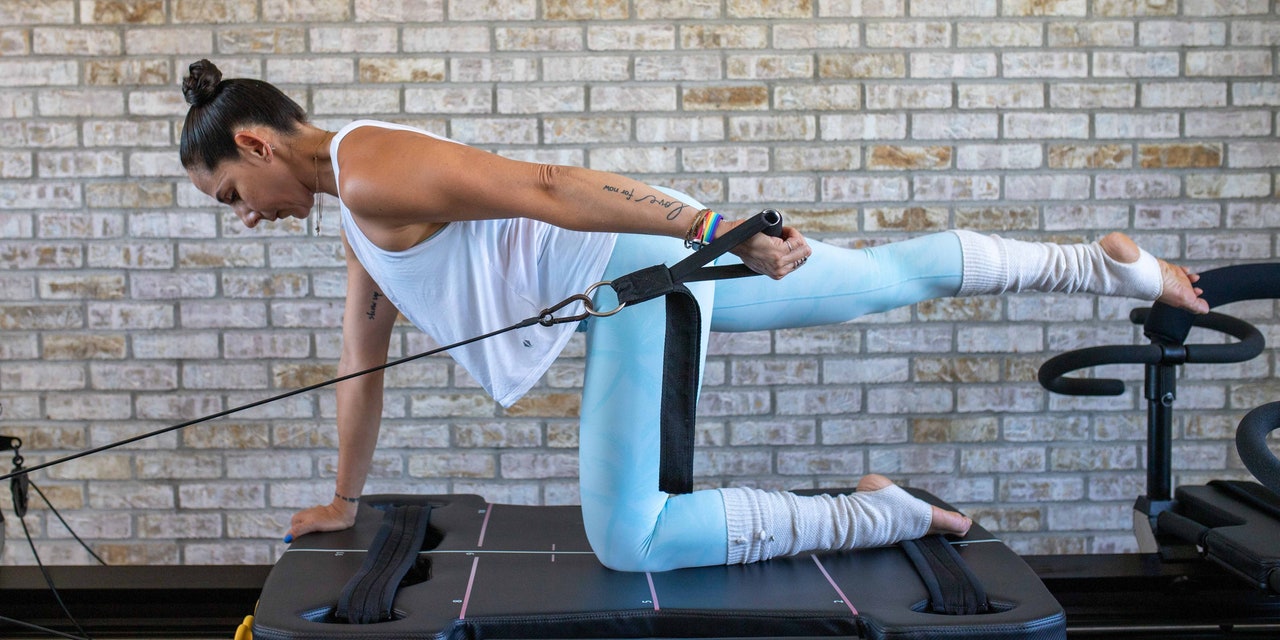 Now, Lagree. The Lagree method started in 1998, and I tried it out for the first time four years later. Inspired by the variable tension principles of Pilates along with his own bodybuilding background, Sebastien Lagree created the Lagree method with the goal of making a modernized, high-intensity, low-impact workout focused on muscular endurance. And he built his own machine to go along with it: the Megaformer.

The two machines are obviously different: The Megaformer has a front and back sliding platform, whereas the Pilates reformer only has a (much smaller) front one. This opens up the possibility for tons of different moves—those done at the back of the machine tend to be heavier resistance and more challenging. The Megaformer also has multiple sets of cables and anchor points, but no shoulder rests, foot bar or accessory equipment.

People generally do Pilates reformer work in private training or in small groups in studios—which can make it pricey—and take mat Pilates classes in gyms and studios in group formats, as well as through various online platforms (making it more accessible). As for the Lagree method, there is no mat version, and its classes were intended for the in-studio, group crowd. This translates to more pricing options, such as monthly memberships or class packages, possibly making it a bit more cost effective than the reformer since you don’t have to just buy one-off classes or private sessions.

What should you know before you take a Lagree method class?

Okay, so that’s a quick rundown on what Lagree is, and how it’s related to Pilates. If that’s piqued your interest, you may be looking to take it to the next level: attending a Lagree method class.

While I’m not technically a certified instructor in Lagree—I wanted to keep it as something I do just for myself rather than part of my job—I’ve probably racked up thousands of classes over the years. But my decades of experience as a fitness pro gives me a unique perspective on what new students may need to know to get the most out of a class!

Here’s what I tell my students and friends before their first Lagree method class.

Really, like 10 to 15 minutes early, at least. This should be standard for anytime you go to a new studio or a new class, as there are often waivers to sign or policies you need to hear about. Plus, this is a great time to get a quick orientation to the space, as well as alert the instructor of any injuries or considerations with your body.

But all this is extra imperative for a Lagree method class (yes, even if you’ve done Pilates reformer before!). The machine is different, and there are a lot of parts to learn: which is the front, which is the back, how the carriage (the platform) moves, what the black cables and red cables do, how to adjust springs, etc. By getting the lay of the land before class begins, you will spare yourself feeling utterly lost and confused.

Many studios require them, but even if they don’t, I would still highly recommend them. Personally, my faves are Toesox.