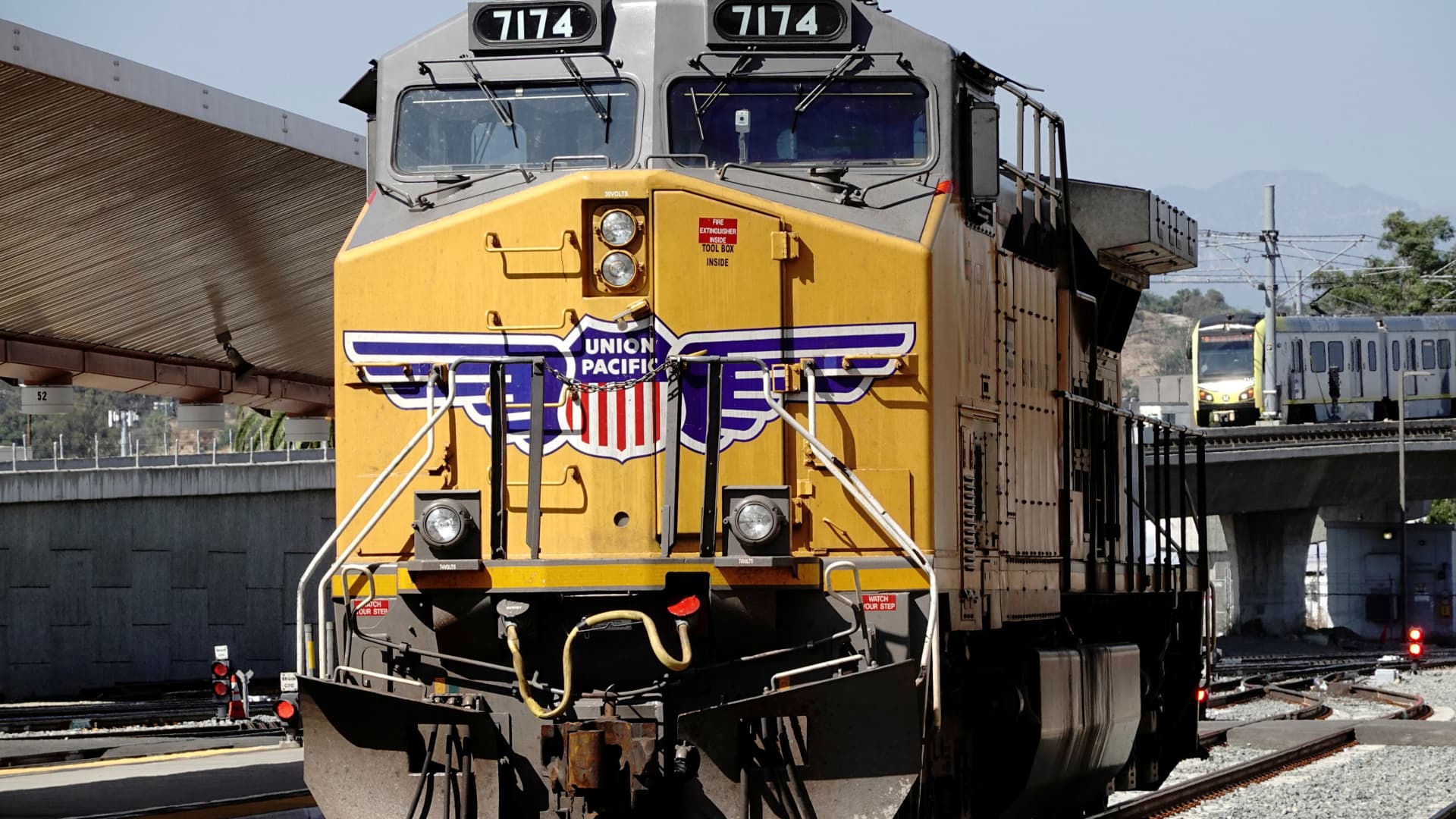 A GE AC4400CW diesel-electric locomotive in Union Pacific livery, is seen ahead of a possible strike if there is no deal with the rail worker unions, as a Metrolink commuter train (right) arrives at Union Station in Los Angeles, California, September 15, 2022.

The Brotherhood of Railroad Signalmen is the second union to vote down the tentative agreement between rail unions, freight rail companies and the Biden administration that was reached on September 15 and critical to avoiding a nationwide rail strike.

The BRS, which represents over 10,000 rail workers and is one of the last three unions at the bargaining table, overwhelmingly rejected the deal, with 39.23% of members approving and 60.57% voting not to approve.

“For the first time that I can remember, the BRS members voted not to ratify a National Agreement, and with the highest participation rate in BRS history,” said BRS president Michael Baldwin in a statement. “I have expressed my disappointment throughout the process in the lack of good-faith bargaining on the part of the NCCC [National Carriers Conference Committee], as well as the part PEB [Presidential Advisory Board] 250 played in denying BRS members the basic right of paid time off for illness. The NCCC and PEB also both failed to recognize the safety-sensitive and highly stressful job BRS members perform each day to keep the railroad running and supply chain flowing.”

The rejection of the National Tentative Agreement begins a “status quo” period during which the union will reengage with the NCCC until December 4.

A spokesperson for the Association of American Railroads tells CNBC, “Parties have agreed to maintain the status quo so discussions about next steps can progress.”

The AAR spokesperson cited the fact that half of all rail unions have ratified agreements based upon President Biden’s PEB recommendations, which includes the largest wage increases in nearly five decades and would lead to immediate payouts averaging more than $11,000 per railroader ahead of the holidays.

“Once in place, contracts crafted in partnership with the most labor friendly administration ever will allow railroads and railroaders to thrive into the future and deliver for both our customers and our families,” the railroad spokesperson said.

The railroads have estimated that a rail strike could cost the economy $2 billion per day.

The BRS vote against ratification follows the Brotherhood of Maintenance of Way Employees (BMWED) which voted not to ratify the tentative deal on October 10. Logistics managers have told CNBC they have been planning again for a possible strike after the September deal seemed to reduce the threat.

In a letter released to members on Wednesday, BMWED president Tony Cardwell said, “Before I talk about the details surrounding the bargaining process, I need to confront some fringe groups proposing dangerous ideas of unsanctioned work stoppages. It is true that this round of National Bargaining has brought different perspectives, complicated conversations, and hard choices. A difference of views from a range of members is a good thing even if it gets a little messy. However, we are not presented with a situation so dire that we cannot use our collective strength to obtain a satisfactory agreement without breaking the law.”

Cardwell said on November 1-2 the union will hold a series of video meetings for members.

The earliest the BMWED union can strike is November 19.

Union Pacific CEO Lance Fritz told CNBC during an interview on “Squawk on the Street” last Thursday of the BMWED, “We’ve got some negotiating to do with that union and we’ve agreed to status quo, we’re in status quo while we’re doing that. I am confident we will find a way to craft an agreement that can be taken back out for ratification. That doesn’t mean a strike is not possible, it just means in my opinion I don’t think it’s probable. We’ve got plenty of runway to figure it out.”

Union Pacific, Berkshire Hathaway‘s BNSF, CSX, Norfolk Southern and the U.S. railroads owned by Canadian National are among the Class I freight railroads represented by the NCCC.

Union spokespeople have stressed that railroads are underestimating union member resistance over issues related to quality of life and benefits including paid time off that they do not think the current tentative agreement satisfactorily covers.

“The railroads consistently underestimate the frustration and anger of the workers. Workers can’t take it anymore,” Richard Edelman, counsel for BMWED and chief spokesperson in the collective bargaining, told CNBC last week. “The Presidential Emergency Board (PEB) ruling is just a recommendation. It is not a lid. Carriers have made the determination of not doing more than the net equivalent of the PEB.”

Caldwell added in his letter to members, “BMWED leadership has gone on a campaign of informing the public and lawmakers of the railroad companies’ unwillingness to provide basic sick days while Carrier Executives bow to Wall Street’s continued desire for more than its fair share. As long as they take that stance, all we can do is encourage solidarity and prepare to exercise self-help.”

The BMWED is the third-largest union with 23,900 members. All 12 unions that represent a total of 115,000 workers must ratify their contracts to prevent a potential shutdown of the national freight rail system. Six rail unions have voted to ratify the deal.

Under the Railway Labor Act, Congress has the ability to impose the resolution from Biden’s Presidential Emergency Board, or order the trains to operate as usual with an extension of negotiations.