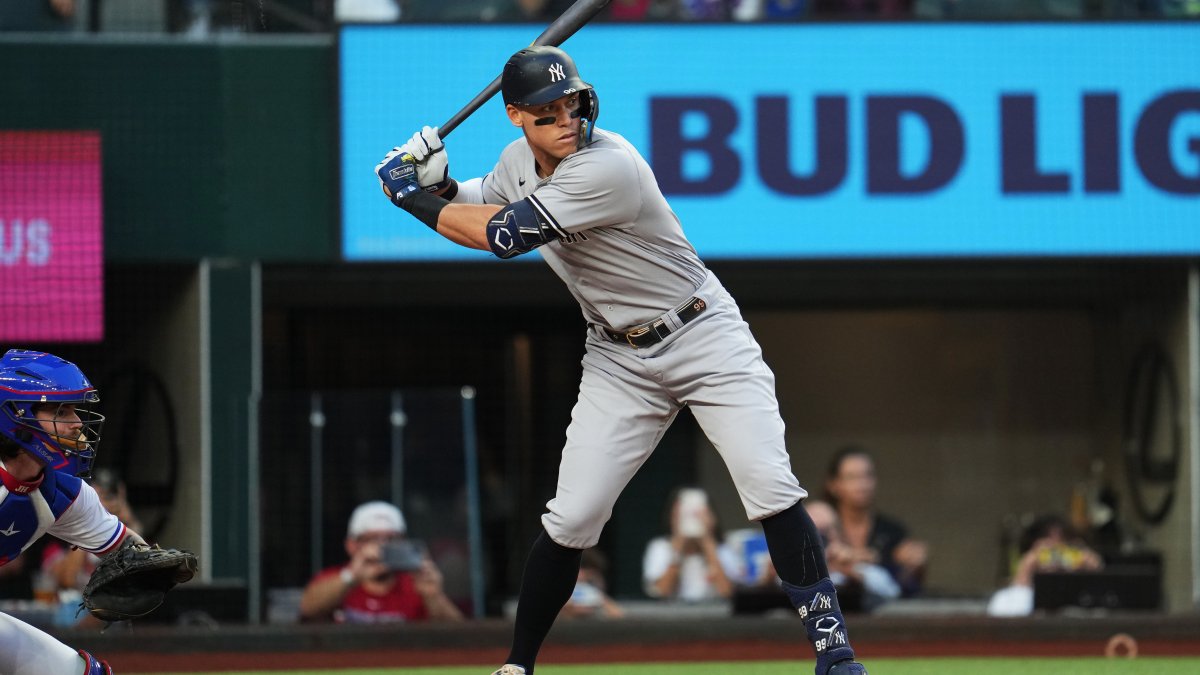 While Aaron Judge is down to three more games to try to get his 62nd home run for the New York Yankees, Luis Severino was nearly perfect in a promising final start before the playoffs.

Severino faced the minimum 21 batters with one walk while pitching seven no-hit innings, in only his third start since missing two months with a strained right lat, before the Texas Rangers broke through against New York’s bullpen in the Yankees’ 3-1 win on Monday night.

Judge has gone without a homer in four games, and his only one in the last 12 was No. 61 on Wednesday in Toronto that tied Roger Maris’ American League record. He went 1 for 4 with an infield single against Texas, and is 2 for 12 with five walks and a hit by pitch since that last long ball.

The Yankees and Rangers play a day-night doubleheader Tuesday before closing the regular season Wednesday.

Manager Aaron Boone said after the game that he hadn’t spoken yet with Judge about whether he would play both games Tuesday.

“I’m going to kind of get with him, figure out what we want to do,” Boone said.

Boone had a one-sided conversation with Severino (7-3). The manager wasn’t going to push him.

Severino wanted to go back out and said he was “1,000%” positive he could have finished the no-hitter. But he understood why Boone didn’t give in.

“I think it was a good decision,” Severino said. “I don’t want to go out there and hurt myself and not be good for the postseason. We’re looking for the bigger picture.”

Severino threw 63 of 94 pitches for strikes for the AL East champions.

“It’s still just a decision that just sucks to happen because he was very efficient,” Boone said. “To have to be the one that shuts that down is not fun, but one you’ve got to do.”

Judge has a chance to become the first AL Triple Crown winner since Detroit’s Miguel Cabrera in 2012. He leads the AL with 130 RBIs trails Minnesota’s Luis Arraez .315 to 311 in the batting race.

With many in the crowd of 35,906 wearing Yankees jerseys and chanting “M-V-P!, M-V-P!” when Judge batted, his hit came on a checked-swing leading off the sixth when he was jammed, along with a groundout, a strikeout and a liner into a double play.

“We did a nice job of keeping him at bay,” Rangers interim manager Tony Beasley said. “He didn’t hurt us at all. I thought overall we threw the ball well.”

Severino, hoping for a postseason rotation spot, struck out seven and averaged 97.9 mph for 47 fastballs, reaching a top velocity of 100.3 mph. He threw 17 changeups, 16 sliders, 11 sinkers and three cutters.

“I was feeling good from the beginning,” Severino said. “The fastball was electric today, it was spot-on.”

Texas’ only runner off him was Josh Smith, who walked in the third and was immediately erased when No. 9 batter Bubba Thompson grounded into an inning-ending double play.

“Pretty certain he would have got that no-hitter … the fastball had, like, crazy life today,” said catcher Kyle Higashioka, drawing comparisons to Corey Kluber’s no-hitter he caught at Texas in 2021, about six weeks after San Diego’s Joe Musgrove also no-hit the Rangers there.

Castro, in his first appearance since July 10 after recovering from a strained shoulder, struck out Adolis Garcia to open the eighth. Rookie third baseman Josh Jung, who is hitting just .195, lined a single over shortstop Isiah Kiner-Falefa. Jonah Heim followed with another solid single before Kole Calhoun’s RBI groundout.

Marwin Gonzalez and Giancarlo Stanton homered in the eighth off just-in reliever Jonathan Hernández. Stanton hit a 457-foot drive and reached 30 homers for the seventh time. Judge struck out between those long balls.

Scott Effross worked the ninth for his his third save with the Yankees.

Martín Pérez (12-8) allowed only one run over six innings while give up five hits and walking five. The Rangers turned five of their club record-tying six double plays behind the All-Star left-hander.