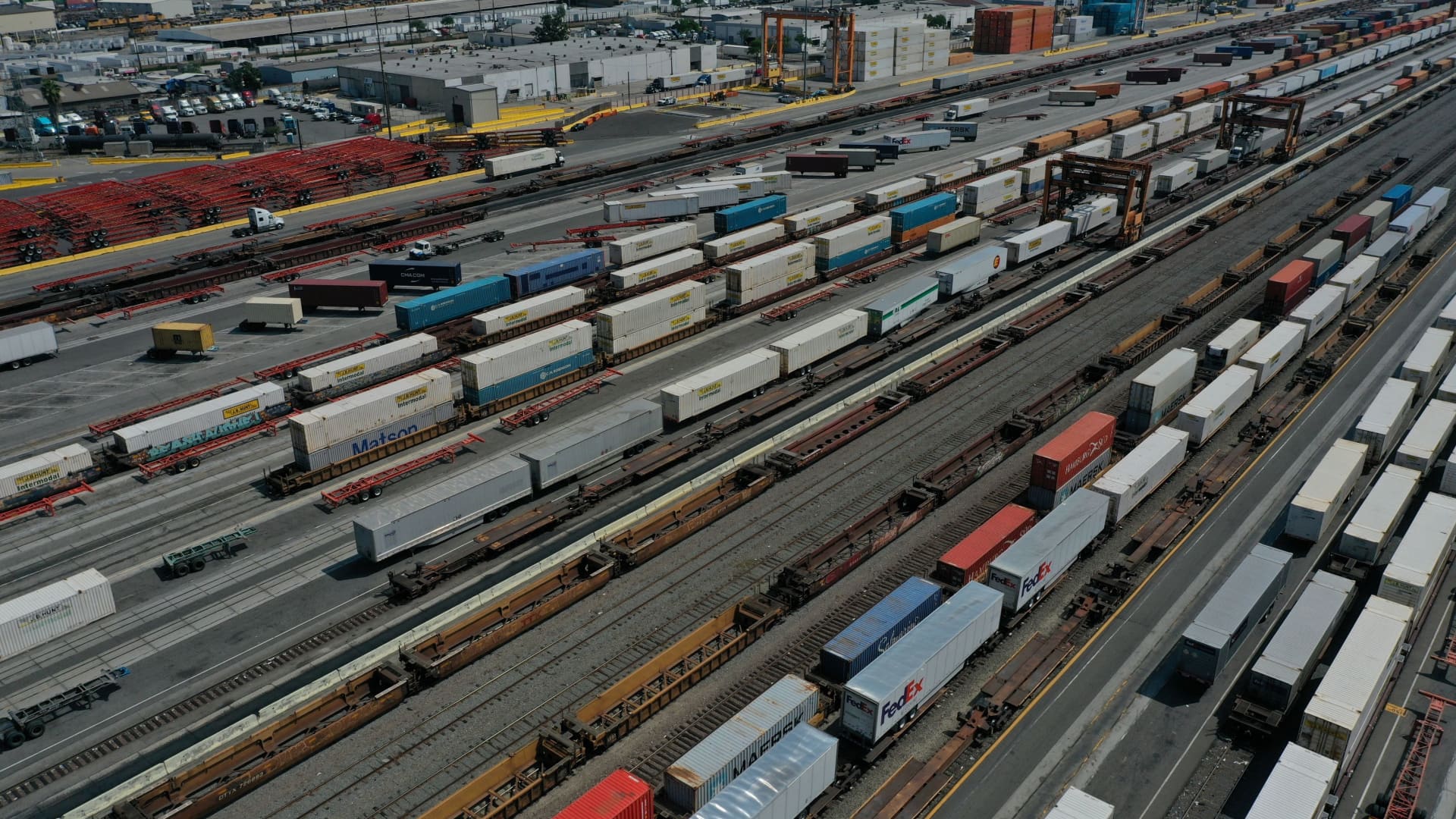 An aerial view of shipping containers and freight railway trains ahead of a possible strike if there is no deal with the rail worker unions, at the BNSF Los Angeles Intermodal Facility rail yard in Los Angeles, California, September 15, 2022.

Logistics managers are dusting off their plans for a possible railroad strike in November that could wreak havoc on the supply chain and cost the U.S. economy up to $2 billion a day.

The National Carriers’ Conference Committee (NCCC), representing the nation’s freight railroads in the national collective bargaining, notified the Brotherhood of Maintenance of Way Employees Division of the International Brotherhood of Teamsters (BMWED) on Wednesday that the union’s latest proposal will not be accepted. A deal between the rails and several large unions to avert a strike, with recommendations from the Biden administration, was moving closer to completion before being voted down by the BMWED last week.

“Now is not the time to introduce new demands that rekindle the prospect of a railroad strike,” the NCCC said in a statement.

Tom Nightingale, CEO of AFS Logistics, tells CNBC that logistics managers are fielding calls from customers in anticipation of a possible strike.

“Prudent shippers already had a plan in place a month ago, and most who did not have now ramped up their contingency planning after the wakeup call last month,” Nightingale said. “Proactivity is the key to supply chain success.”

For many intermodal shipments — shipments that use multiple modes of transport such as ocean, trucking and freight rail — there can be a week between when cargo is picked up and when it makes it onto the rail lines, according to Nightingale.

“That lag time will exacerbate the effects of delays and service interruptions, so effectively managing the risk of intermodal disruption means you must plan early and often,” he said.

In anticipation of a strike in September, Norfolk Southern, Berkshire Hathaway subsidiary BNSF, CSX, and Union Pacific all began ramping down freight approximately five days ahead of the strike date in an effort to move critical hazmat materials, such as chlorine and ethanol. That freight took priority over common freight.

“Shippers had a lot of sensitivity to the potential rail strike,” Nightingale said. “No shipper wants to lose their job or risk losing a customer when they have had this much advance notice to a looming disruption.”

As a result, AFS saw a significant uptick in customers looking to shift loads away from intermodal to other modes like truckload and even less-than-truckload shipping (LTL).

“Shippers don’t want cargo with a limited shelf life sitting at a rail yard, particularly commodities like chemicals and refrigerated food and beverage,” he said.

Under the Railway Labor Act, Congress has the ability to impose the resolution from Biden’s Presidential Emergency Board, or order the trains to operate as usual with an extension of negotiations. Nov. 19 is the earliest that rail unions can strike.

“While it is premature to make predictions about what could happen in negotiations, railroads will take every necessary and prudent step to ensure the safety and security of the network and the communities we serve,” a spokesperson for the Association of American Railroads said in an email to CNBC. “The rail network does not turn on and off like a light switch and advanced planning and positioning of assets takes time. Should uncertainty remain ahead of the status quo expiring with BMWED, past action is a good indicator of how those operational plans are executed, and specific decisions on timing will be made as events necessitate.”

“If you are in logistics and you are not already scenario planning for a potential work stoppage you may be behind the curve right now,” said Brian Bourke, chief growth officer of SEKO Logistics. “Everyone is waiting for after the election for any additional movement or news, but the time to start planning is now.”

On October 18, the BMWED posted on its website a letter members could use to send to their congressional representatives covering the quality of life and benefits issues, which have been a major sticking point in negotiations over a new contract. One of the key points of contention is the BMWED looking for more paid time off, especially for sickness.

“The push for paid sick time off could potentially lead to Congressional action,” the letter said. “While we hope the carriers will acknowledge the concerns of their employees and negotiate with us, it is important that we are prepared for their unwillingness to address quality of life concerns.”

“The railroads consistently underestimate the frustration and anger of the workers. Workers can’t take it anymore,” Richard Edelman, counsel for BMWED and chief spokesperson in the collective bargaining, told CNBC. “The Presidential Emergency Board (PEB) ruling is just a recommendation. It is not a lid. Carriers have made the determination of not doing more than the net equivalent of the PEB.”

Union Pacific CEO Lance Fritz told CNBC during an interview on “Squawk on the Street” Thursday morning, “We’ve got some negotiating to do with that union and we’ve agreed to status quo, we’re in status quo while we’re doing that. I am confident we will find a way to craft an agreement that can be taken back out for ratification. That doesn’t mean a strike is not possible, it just means in my opinion I don’t think it’s probable. We’ve got plenty of runway to figure it out.”

On Sept. 15, before the previous national strike deadline, an agreement was announced by Labor Secretary Marty Walsh between the two largest unions, the Brotherhood of Locomotive Engineers and Trainmen (BLET) and the Sheet Metal Workers’ Transportation Division (SMART-TD) and the National Carriers’ Conference Committee. The BMWED is the third-largest union with 23,900 members.

“The railroads have made billions off of their workers,” Edelman said. “These are incredibly skilled jobs where sophisticated pieces of equipment are used. The workers do not feel valued.”

One of the worries among logistics experts is workers quitting, but the NCCC spokesperson told CNBC, train and engine service headcount was up 7.4% in September compared with January. Fritz told CNBC that UP’s attrition rate is near its historical norm this year and it’s hiring plan has been right on target, with no indication of any “Great Resignation” at the rail carrier.

“Those new hires came on board for the same reason most railroaders stay for life – railroading is a career that allows you to both support a family and take deep pride in your work,” the spokesperson said.

“Workers need to be able to take off when they are sick. Under the present policy workers are penalized. Railroad executives are so deep into their own bubbles they think all of this is okay,” Edelman said.