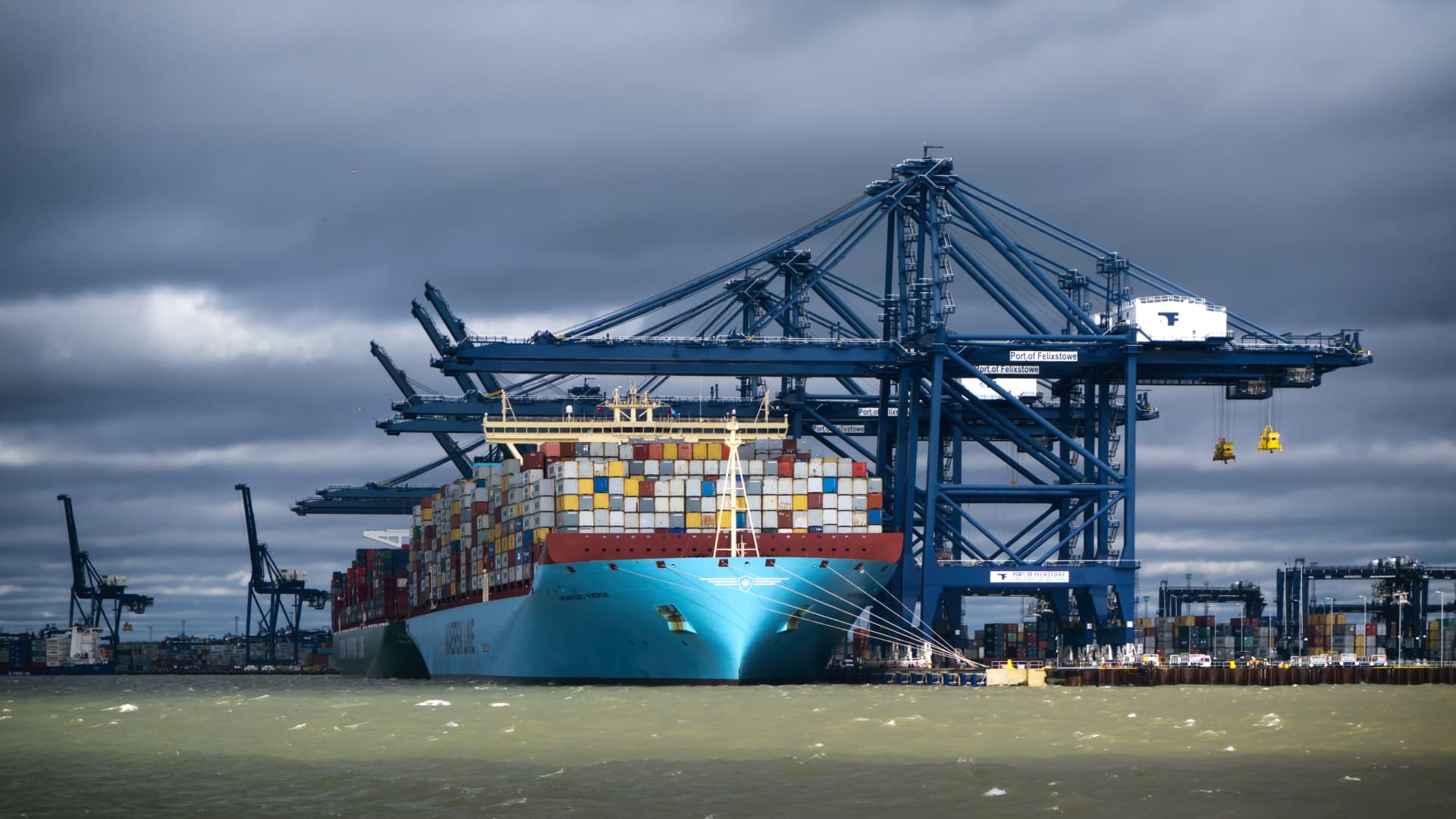 The dockworkers at Felixstowe, the largest port in the UK, have started an eight-day strike in protest over their wages and inflation, overlapping with an ongoing strike at Port of Liverpool. Together, the two port strikes threaten imports and exports across industries —much bound for the U.S. — during a critical ramp in holiday shipping season.

The combined value of weekly trade that moves out of the ports of Felixstowe and Liverpool, according to MDS Transmodal, is nearly $7 billion. And 30% of the traffic handled at the port of Liverpool comes from or is destined for the U.S.

“This comes at a pivotal time for the holidays when products need to arrive early to be placed on store shelves,” said Antonella Teodoro, senior transport consultant at MDS Transmodal.

The strike comes after the British government announced Friday it would tighten rules on strikes. In response, 11 unions including Unite, whose members are striking at the ports of Liverpool and Felixstowe, are seeking legal review of the government’s strike-breaking laws.

According to Bobby Morton, national officer of Unite, the union has the legal right to strike.

“We will strike again and again and again until our wages match inflation,” Morton said in a recent phone conversation with CNBC. “We asked our members, are you prepared to accept the seven percent that’s been imposed upon you? Or do you want to carry on striking to get what you deserve? And we got a return of 82% of our members saying that we want to carry on regardless. Now the inflation rate is rocketing. We need to be recognized and we need to be thanked for the efforts that we have made.”

Morton said the companies that own the ports — CK Hutchison Holdings Ltd owns and operates Felixstowe, and Peel Ports Group, Britain’s second-biggest ports group, owns and operates the Port of Liverpool — are expected to meet Wednesday to discuss the next steps.

When the Liverpool strike began on Sept. 16, David Huck, chief operating officer at Peel Ports, said in a statement that the company “fully recognise our colleagues’ concerns on the cost of living crisis, and that’s why we have responded with a pay package which represents a 10% average increase in annual pay.”

The offer was for an 8.3% pay increase with a one-off payment of £750 for each container operative.

UK inflation has been at a four decade high in recent months, and in July the national CPI topped 10%.

CK Hutchison, based in Asia, could not be immediately reached for comment on the Felixstowe strike.

The Port said in a statement to the press on Tuesday that it was “very disappointed that Unite has announced this further strike action. The collective bargaining process has been exhausted and there is no prospect of agreement being reached with the union.”

According to the BBC, the Port had offered a 7% pay raise and bonus of £500, while the union was seeking a 10% pay raise to match the inflation peak.

During this round of strikes, logistics managers are moving more trade to alternate ports. In the first strike at Felixstowe in August, there was less diversion. As a result, the wait time for exports bound for the U.S. tripled in duration.

“On average, export containers wait about seven days at Felixstowe before being loaded onto a vessel,” said Josh Brazil, vice president of supply chain insights for Project44. “Last month’s strike caused export containers to wait as long as 21 days in port.”

The CNBC Supply Chain Heat Map for Europe shows the continued impact of the congestion.

“This time, it’s more likely that supply chains will be under pressure and trade could be affected by the overlapping Liverpool strike,” warned Brazil. “Shipping wasn’t at its peak at the time of the strikes last month, so the impact was significant but manageable. With Christmas fast approaching, the prospect of two ports closing at once won’t help the UK’s already troubled supply chain,” he said.

The brands and products bound for U.S.

Auto parts, food, and furniture are also exported, and U.S. exports are also being impacted by a slowdown in processing. Ford was one of the top exporters of Mustangs to Liverpool between August and September, according to customs data.

CNBC also reviewed the Bills of Lading out of Liverpool. Items bound for the U.S. ranged from auto parts for Ford — which recently cited supply chain issues for an additional $1 billion in costs — furniture from Raymour & Flanigan, whiskey and beer from Diageo, copier ink, and parts for Xerox and Donaldson.

Companies that export out of Felixstowe include Ocean Spray, Nutrition and Biosciences (which merged with IFF), Brown Forman (the company that owns Jack Daniels), Becton Dickinson, and Pilgrim’s Pride. The two-week strike at the Port of Liverpool ends Sunday.