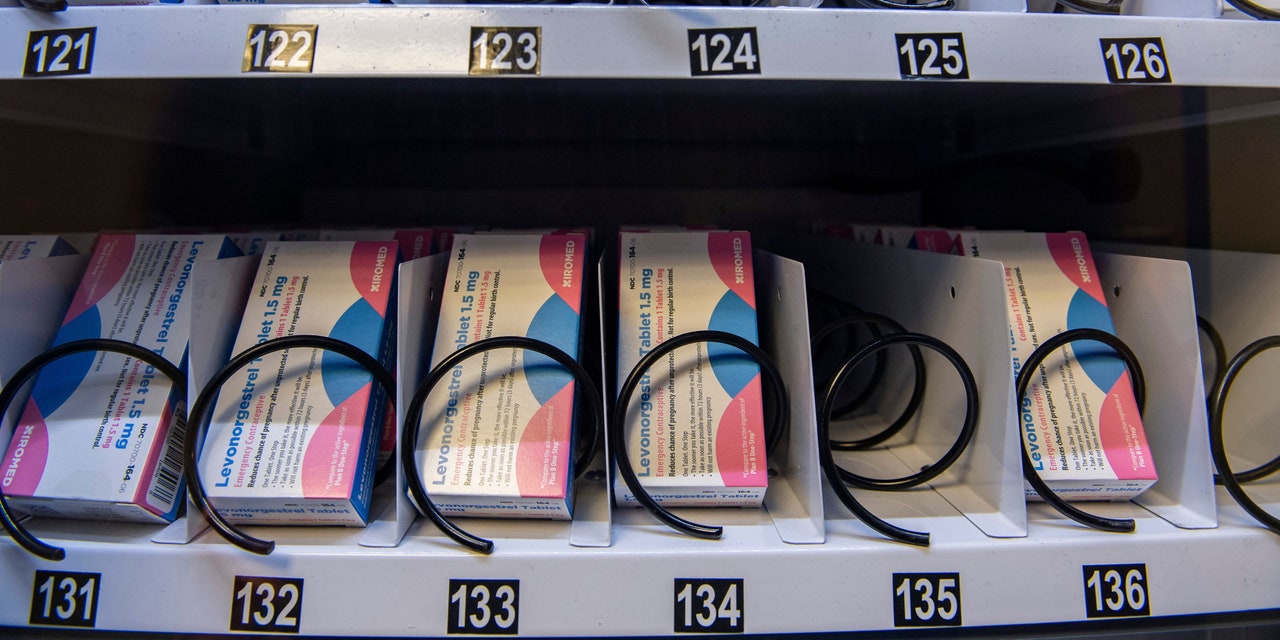 In the spring of 2019, students from Boston University’s Students for Reproductive Freedom (SRF) club attended an annual reproductive justice conference, now called the Collective Power Conference, at Hampshire College in Amherst, Massachusetts. At the meeting, the SRF students met members of a like-minded group from Brandeis University who told them about a surprising and innovative project: They had a vending machine installed on their campus that dispensed emergency contraception (EC).

The BU students were inspired and set out to “emulate that Brandeis project on BU’s campus,” Charlotte Beatty, who served as co-president of SRF last year and was a freshman at the time of the conference, tells SELF. Over the next three years, BU students, including Beatty and her SRF co-president Molly Baker, worked to make an EC vending machine a reality on their campus. This past March, it was finally installed, providing BU students with reliable, convenient, and anonymous access to a generic version of Plan B at a much lower cost than they’d likely pay in a drugstore.

Today, student activists across the country—from Brandeis to Stanford—have spearheaded projects to install these machines, which could become more vital than ever in the aftermath of Roe v. Wade’s overturning. If you’re fired up to increase access to reproductive health care services, here’s how you can get an emergency contraception vending machine onto your campus.

Make sure you have the support of campus officials and fellow students.

Before you begin the project, it’s important to find out what’s feasible on your campus, Nicola Brogan, project manager for the American Society of Emergency Contraception, tells SELF. Brogan also oversees the organization’s Emergency Contraception for Every Campus (EC4EC) program, which helps college students get EC vending machines on their campus or establish other EC distribution programs.

“If you don’t have support from administration, a vending machine is basically impossible,” Brogan says. In other words, logistics like getting permission (from someone like a dean, student health center manager, or facilities director) to take up campus space with an EC machine, using empty slots in an existing vending machine, and buying the medication itself all require help from the campus powers that be.

Campus officials may also wonder if an EC machine is even legal. Though some states require permits for these vending machines, according to EC4EC’s state-by-state regulation guide, only one state, Connecticut, has laws explicitly prohibiting dispensing EC from a vending machine.

It may also be helpful to poll students by conducting a survey on campus to find out how many people would utilize the vending machine, says Brogan. Not only is it useful to the students spearheading the project to know that there’s a need and enthusiasm for the service, but administrators might be more likely to get on board once they realize it’s something students want and will actually use, she says.

“That acts as a foundation when you go and have that conversation with the administration to prove, like, hey, this is not just me and my two friends who want to do this,” Brogan says. She adds that a survey can show officials that many students “think it’s a good opportunity for the campus.”

Figure out how to pay for the project.

Buying large amounts of generic Plan B, as well as the vending machine itself (if you aren’t able to add the medication to an existing machine on campus), will obviously cost money, and there are a variety of ways to pay for it, says Brogan. For instance, BU’s SRF group is a Planned Parenthood Generation Action club, meaning they get annual funding through Planned Parenthood (in their case, through Boston Planned Parenthood).

The students also used club funding provided by BU’s student organization office—a support source available on many college campuses—and money from individual alumni donations, says Beatty. Between installing, stocking, and promoting the vending machine, it cost the BU students around $3,000, according to Beatty. The largest expense was the machine itself, she says, which was about $2,700.

Get help sourcing the medication and buying and stocking the vending machine.

Even though they had the funding, BU’s SRF students found that there were other obstacles to overcome—namely, finding someone with the right type of medical license to bulk order Plan B.