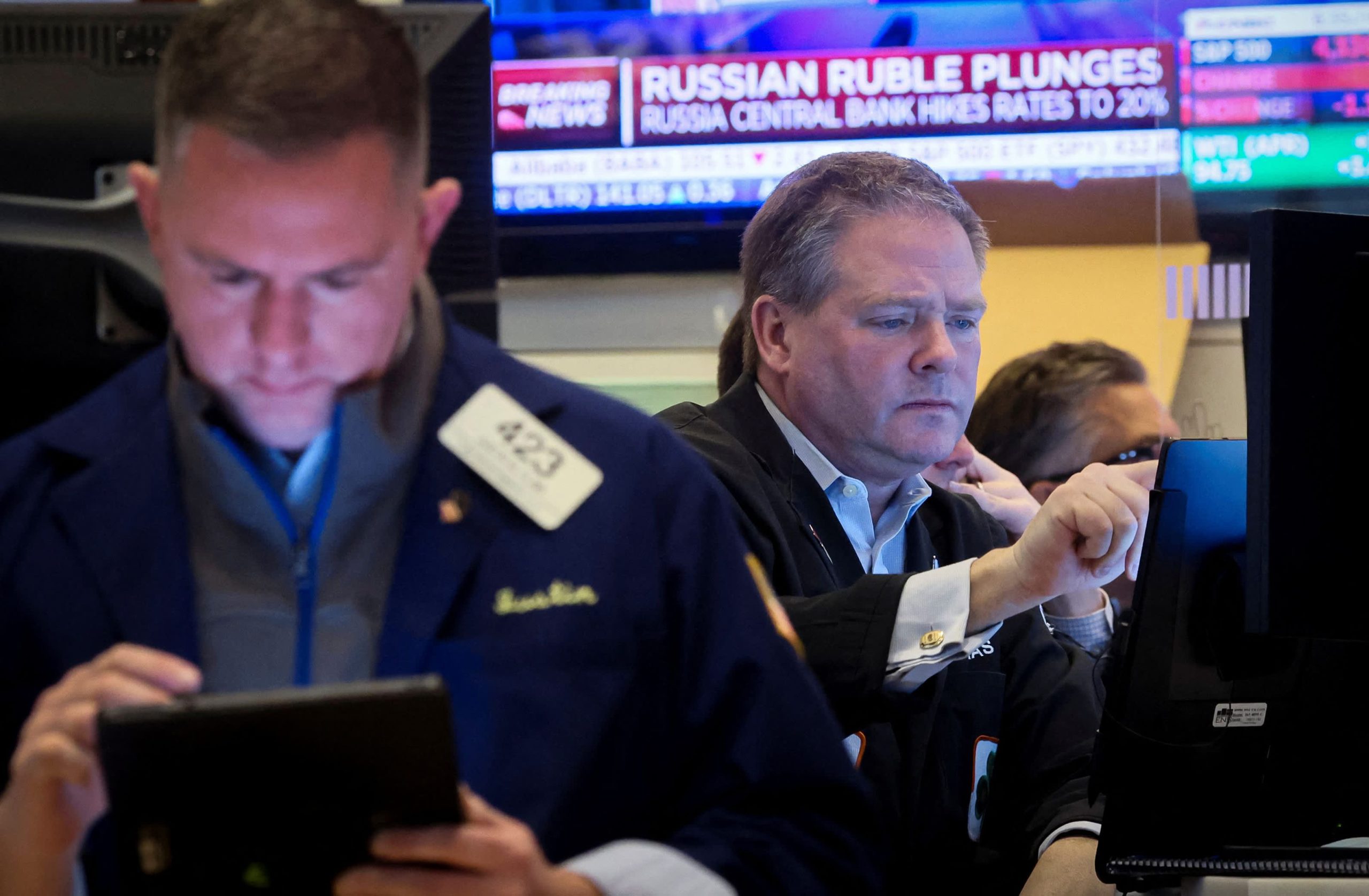 U.S. stocks fell in volatile trading on Monday as investors monitored developments in the Russian invasion of Ukraine, including a new batch of sanctions from the U.S. and its allies.

The Dow Jones Industrial Average was down 340 points, or about 0.1%, after being down more than 500 points in morning trading. The S&P 500 and Nasdaq Composite were down 0.9% and 0.4%, respectively, after briefly rallying into positive territory.

The moves come amid turmoil over the conflict between Russia and Ukraine, where Ukrainian forces have held key cities including the capital of Kyiv. Officials from both countries held a round of negotiations near the Belarus border on Monday.

“War is fundamentally a ‘risk off’ environment for risky assets as global investors move into sovereign bonds and other ‘safe havens’ until some kind of conclusion/new normal becomes priced in. … Everything about this is unprecedented, so about the only rational thing to say about equities is to expect volatility to continue pending a resolution,” Raymond James strategist Tavis McCourt said in a note.

Bank stocks were under pressure, with JPMorgan falling 2.8% and Citigroup dropping more than 4%.

Government bond yields were sharply lower across the curve, with the benchmark 10-year Treasury note most recently at 1.873%, off 11 basis points on the session. A basis point is 0.01%; yields move opposite prices and were lower amid high demand for save-haven bonds.

Currency markets were a major area of volatility on Monday. The Central Bank of Russia more than doubled its key interest rate, to 20% from 9.5% in reaction to a currency move that saw the ruble tumble nearly 16% against the U.S. dollar. The ruble hit a record low against the dollar early Monday.

“We may have seen the sharpest depreciation of the ruble in modern history, but this is hardly a bottom,” wrote Alex Kuptsikevich, FxPro senior market analyst. “It will be possible to talk about movement towards stabilization only after appropriate steps from politicians.”

Over the weekend, the U.S. joined allies in Europe and Canada in moving to bar key Russian banks from the interbank messaging system, SWIFT. The system connects more than 11,000 banks and financial institutions in more than 200 countries and territories.

Russian President Vladimir Putin put his country’s nuclear deterrence forces on high alert Sunday amid a growing global backlash against the invasion. Ukraine’s Defense Ministry said representatives for Ukraine and Russia have agreed to meet on the Ukraine-Belarus border “with no preconditions.”

Oil stocks were mixed despite the rise in commodities prices. Solar energy stocks jumped, with Enphase Energy rising roughly 5%, as the conflict made some policymakers more worried about the reliance on fossil fuels.

Last week, President Joe Biden reacted to the attack by announcing several rounds of sanctions on Russian banks, on the country’s sovereign debt and Putin and Foreign Minister Sergey Lavrov. The U.S. and European allies have also taken action against Russia’s central bank.

“Some Russian banks being removed from SWIFT (energy transactions exempt) and the freezing of the Russian central bank’s access to its foreign currency reserves held in the West clearly increases economic tail risk,” said Dennis DeBusschere of 22V Research.

However, he believes Russia can still sell oil and there could be “loop holes” in Russia’s frozen assets, which “might limit the disaster in markets for a few days.”

Russia closed its stock exchange on Monday, but the VanEck Russia ETF dropped more than 25% in U.S. trading. European bank stocks, including Deutsche Bank, sold off sharply on Monday.

Monday marks the final day of trading for February and, even when a strong rally at the end of last week, the three major U.S. averages are on track for a loss of roughly 3% each this month.

Sebastian Maniscalco Doesn’t Care if His Comedy Offends You: ‘If I Edit Myself, I Might as Well Stop’