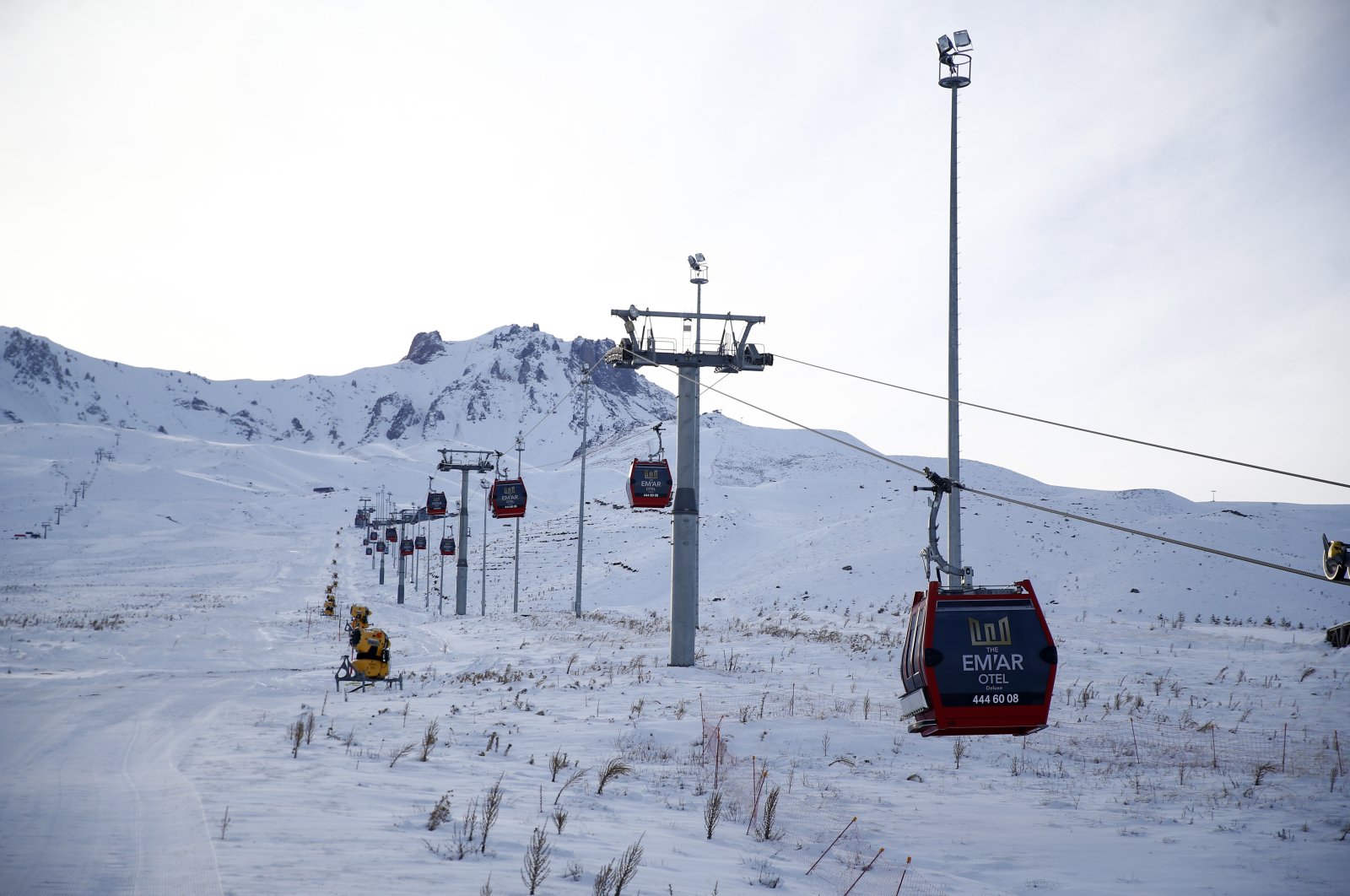 Uludağ, Palandöken, Kartalkaya, Erciyes, Kartepe and Ilgaz, Türkiye’s popular winter tourism hubs, are gearing up for a stream of visitors in a few weeks as the winter starts setting in.

Ski resorts, some operated under private-public sector partnerships, offer months of leisure to skiers with their long tracks and venues for snowboarding and sleds. Remaining inactive most of the year, they enjoy a steady stream of tourists from all across the globe.

In Uludağ, one of the most popular destinations, snowfall started blanketing this highest mountain of the Marmara region. With its proximity to Istanbul, one of the most popular cities for tourists and a flight hub, Uludağ, situated just about 40 kilometers (12 miles) from the central area of the northwestern province of Bursa, hosts a wide array of winter tourism options.

Last year alone, some 2 million people visited the mountain, the highest in the region at an elevation of 2,543 meters. The mountain, whose lush outskirts and highlands are home to excursionists in the summer, is dotted with hotels and other accommodation facilities, with a capacity of about 5,000 beds. Concentrated in two areas near the peak, vacation spots are located next to 20 ski tracks, with lengths varying between 300 and 1,980 meters. Haluk Beceren, a hotelier at Uludağ, says they enjoyed a good season last year, especially after the COVID-19 pandemic, which confined millions at home. “We had a good number of skiers and guests and we expect a better season this year,” he told Anadolu Agency (AA) on Tuesday. “Bursa has a good reputation in terms of hospitality for foreign visitors. This year, we expect a rise in the number of Russian tourists and some already started booking. We also have a high number of Arab tourists and tourists from Middle Eastern countries in recent years. Some learn skiing here and come back every year,” he said. Harbi Türk, who works as a front office manager at a hotel in Uludağ, said Uludağ pops up in the mind of Turkish tourists when it comes to winter holidays. “Hotels have finished all preparations, from renovations to reparations, and they will offer more activities this year. Uludağ is quite popular due to its proximity to major cities,” he said.

Further east, Palandöken emerges as a major winter tourism destination. Thick snow has already covered the mountain in the eastern province of Erzurum, while locals predict an influx of visitors within a few weeks. Palandöken is popular among tourists from nearby Iran, Russia, Ukraine and Azerbaijan. Along with the usual ski tracks and snowboard courses, Palandöken hosts a wide variety of leisure activities, from zip lines to paragliding and giant swings. Nighttime skiing is also popular in this hub of mountain resorts located near 56 tracks at lengths between 1 and 14 kilometers.

Northern Türkiye’s most popular winter hub Kartalkaya will welcome visitors with five hotels with a capacity of 2,000 beds and 25 ski tracks whose total length is 75 kilometers. Last winter, it hosted about 250,000 holidaymakers. This year, businesses hope for more, as the past few days of snowfall made the resorts ready for skiing. Halit Ergül, who heads a hoteliers’ association, says they will likely start the season on Dec. 15.

“With a bit more snowfall, we may start earlier,” he said. Currently, the thickness of snow is around 25 centimeters (10 inches), still not enough for good skiing.

In central Türkiye’s Erciyes, local businesses count down to mid-December for the onset of the season. Known for its fine snow that doesn’t stick to skis, Erciyes is home to 41 ski tracks at a total length of 130 kilometers. Illuminated tracks also offer nighttime skiing for visitors. Erciyes, located in the province of Kayseri, hosted more than 2 million people last season and this year, an estimated 3 million people are expected. Along with tourists from other Turkish cities, Erciyes is popular among foreign tourists, especially thanks to charter flights from abroad, including Poland and Russia.

Kartepe in the northwestern province of Kocaeli also emerged as a major destination in recent years, Though it has fewer ski tracks than other winter resorts, Kartepe attracts holidaymakers, especially from Istanbul, due to its proximity to the city. So far, however, snowfall is limited in the resort atop Samanlı mountain.

Ilgaz, a summer resort, also attracts visitors in the winter. This season, hoteliers expect more visitors after the opening of a new airport in Kastamonu, a northern province just 40 kilometers from the mountain. Yet, the high season is expected to kick off much later in Ilgaz as the little snowfall did not take hold so far in the mountain whose peak is capped with snow.