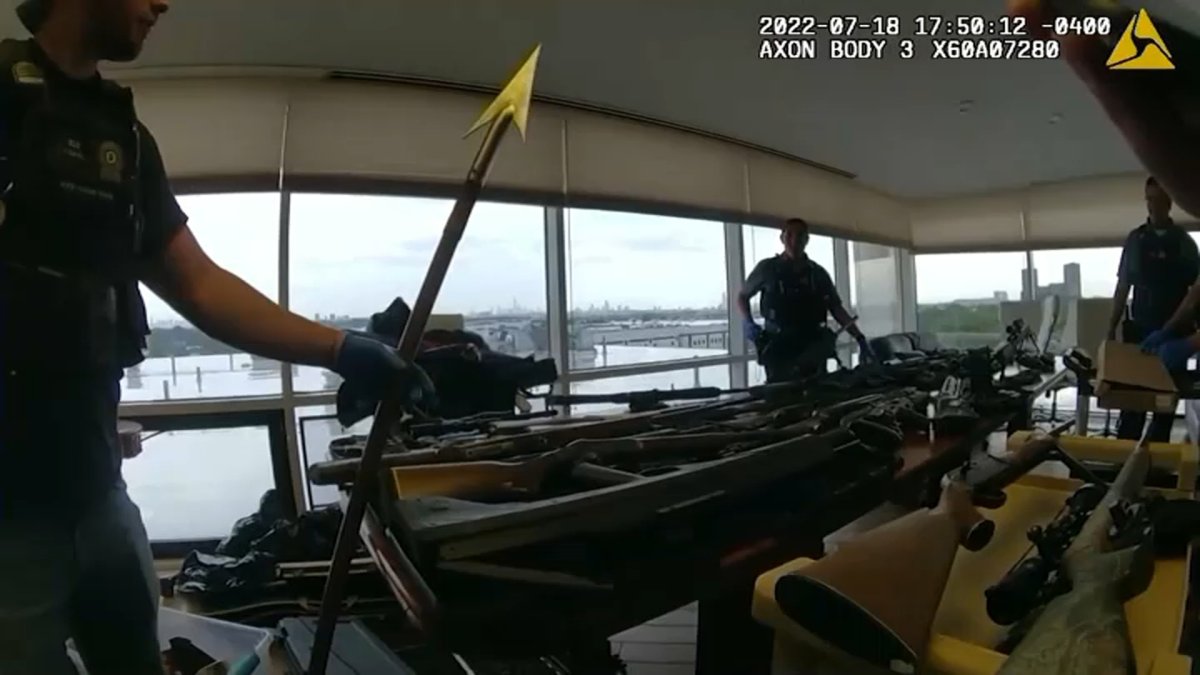 After a large weapons cache was found hidden inside a New Jersey hospital employee’s closet, video released Wednesday offers the first look at the weapons stockpile.

Officers were called to Hudson Regional Hospital after a bomb threat was called in on the afternoon of July 18. While that threat turned out to be a hoax, a bomb detection dog alerted police to an unlocked closet inside a worker’s office.

What the Secaucus police officers found inside was nothing short of shocking and unsettling. Nearly 40 firearms were found in all, with video showing the officers carry the guns out one by one. Police said that 11 handguns, 27 rifles and shotguns, and a .45-caliber semi-automatic Kriss Vector rifle with a high-capacity magazine were found inside. Fourteen rounds of high-capacity ammunition were also found.

Within minutes, the stashed weapons filled up the entire length of a table. Police later arrested Reuven Alonalayoff, who was working as the hospital’s marketing director, on Aug. 7 at Newark Liberty International Airport, with the help of Homeland Security Investigations.

The 46-year-old Alonalayoff was charged with possession of an assault firearm and two counts of possession of a high-capacity magazine. It was not clear how the employee was able to get so many guns inside the hospital, or how long they had been stashed at that location. It also was not known what he was doing at the airport, or why he had so many guns at his office.

Prosecutors said he appeared in court on Monday. Those who live near Alonalayoff’s Elmwood Park home called the whole situation a mystery, saying that he only lived on the block for about a year and they didn’t know much about him.

Police discovered a cache of weapons in a hospital closet, and the man facing charges for it is the hospital marketing director. Anjali Hemphill reports.

One neighbor said that people have been shuffling in and out of the home over the past year or so, making the weapons arrest even stranger and more puzzling.

No one answered the door at the home on Wednesday. Attorney information for Alonalayoff was not immediately available.

Hudson Regional Hospital has refused to comment on the incident, or if safety protocols had changed since the cache was found. A spokesperson previously said that “the presence of weapons in a hospital is inexcusable” and that the incident has given them the opportunity to review their protocols.