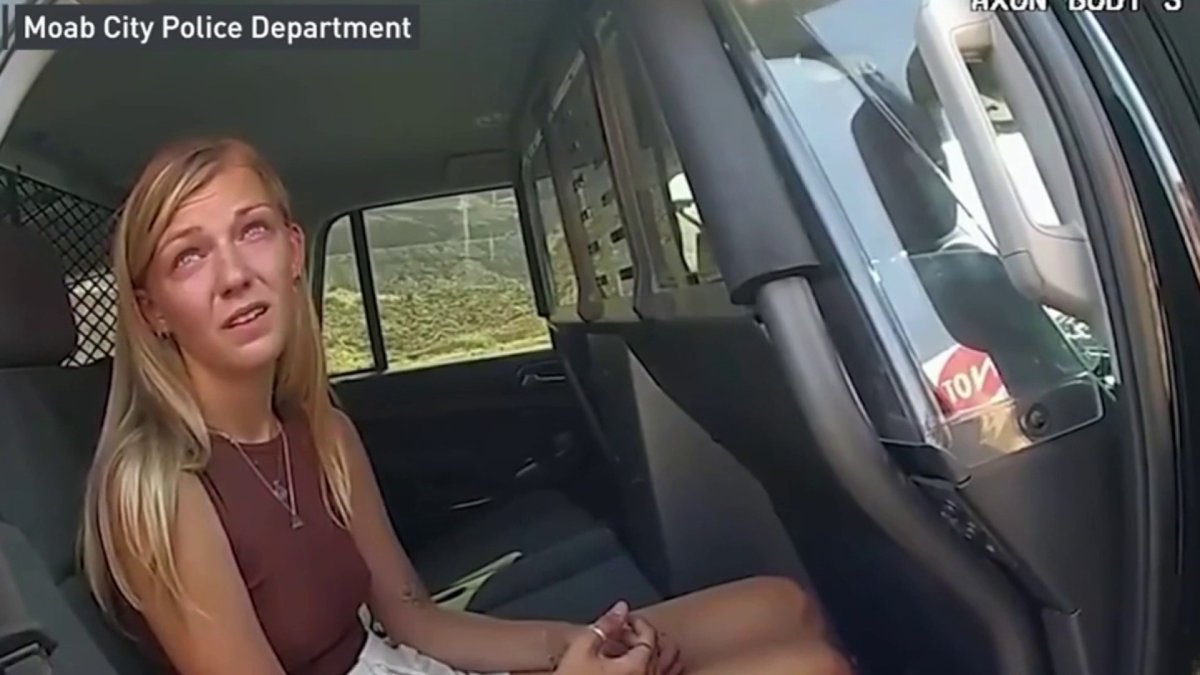 Police in Moab, Utah, on Thursday released new body camera footage of a stop involving Gabby Petito and Brian Laundrie in the days before the 22-year-old Long Island native went missing in Wyoming, further providing insight into the relationship between the engaged couple.

The footage showed an officer questioning Petito after police pulled over the couple’s van on Aug. 12 when they saw it was speeding and hit a curb near the entrance to Arches National Park. Petito told police that she “kind of punched” Laundrie in the arm in the car after she saw police had turned their lights on behind them.

The young woman whose remains were found last month in Wyoming’s Grand Teton National Park also detailed the dispute that led witnesses to call the cops on the couple. Some of what Petito told police in the video was previously seen in another officer’s bodycam video that was released mid-September, before Laundrie also went missing.

Petito told officers that Laundrie did hit her as witnesses said but that she slapped him first because he kept telling her to shut up.

“Did he hit you, though? I mean, it’s OK if you’re saying you hit him, and then I understand if he hit you, but we want to know the truth if he actually hit you, because you know,” the officer pushed for more details.

“Definitely I was cut right here (pointing to her left cheek) because I can feel it. When I touch it, it burns,” Petito said.

The new footage also showed the officer following up with one of the witnesses who reported the couple fighting over a cell phone.

“I want to say that he was trying to grab her phone, and I’m not sure exactly why,” the witness said over a phone call.

“And then it seems like he had sort of walked to one side of the van and sort of wasn’t letting her in, and then the male was stepping into the driver’s seat and she was trying to get into the van, and he said something about, ‘Why are you being so mean?’ something like that. I remember she sort of hit him a few times. And it wasn’t, like, slugs in the face, but just kind of like two kids fighting,” the witness added.

Petito had told police that they were fighting over “some personal issues, adding that she suffers from obsessive-compulsive disorder that affects her behavior.

“Some days, I have really bad OCD, and I was just cleaning and straightening up and I was apologizing to him saying that I’m so mean because sometimes I have OCD and get frustrated,” she said.

Laundrie said on the video the couple got into a minor scuffle that began when he climbed into the van with dirty feet, and said he didn’t want to pursue a domestic violence charge against Petito, who officers decided was the aggressor.

“I’m not going to pursue anything because she is my fiancée and I love her. It was just a squabble. Sorry it had to get so public,” Laundrie said.

Ultimately Moab police decided not file any charges and instead separated the couple for the night, with Laundrie checking into a motel and Petito remaining with the converted sleeper van. The police department later launched an internal investigation into their handling of the couple’s case.

Petito and Laundrie started their drive across the U.S. in July from New York’s Long Island, where both grew up. They intended to reach Oregon by Halloween according to their social media accounts, but Petito vanished after her last known contact with family in late August from Grand Teton National Park in Wyoming, authorities said.

The whole world is following the case of Gabby Petito, the aspiring influencer who disappeared on a cross country road trip with her fiance, Brian Laundrie. This week on The Debrief, Pei-Sze Cheng gets you caught up to speed on what is now a homicide case, then talks about why this missing persons case has caught the attention of so many – and how domestic violence survivors might see themselves in the 22-year-old from Long Island.

Laundrie drove the Ford Transit van back to Florida on Sept. 1 alone, police said. A few days later, Laundrie and his parents went camping at Fort De Soto Park, according to their family attorney. The park is about a 64-mile drive from the vast nature reserve where the FBI and local law enforcement have been looking for Laundrie since he vanished more than two weeks ago.

Attorney Steve Bertolino also confirmed Thursday that Laundrie bought a new phone on Sept. 4, shortly before the family went to camping. The lawyer says Brian Laundrie opened an AT&T account for that phone but left it at home the day he supposedly went for that Carlton Reserve hike and never returned.

The search for Laundrie is ongoing. Laundrie is the FBI’s prime person of interest in Petito’s disappearance, officials have said, but he has not been charged with crimes relating to it at this point.

The search for Brian Laundrie, the fiance and person of interest in the death of Gabby Petito, is intensifying. Sarah Wallace reports.