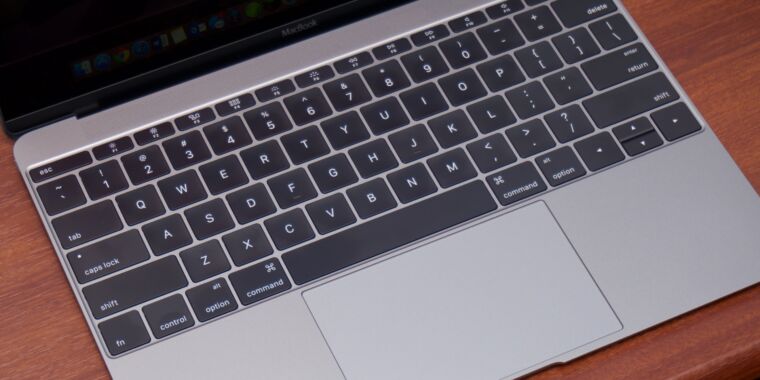 If you bought a MacBook with one of Apple’s low-profile butterfly-switch keyboards, if you ever had the keyboard repaired, and if you live in California, Florida, Illinois, Michigan, New Jersey, New York, or Washington state, good news! A judge has approved a $50 million settlement to a class-action lawsuit that Apple agreed to in July, meaning that payouts to affected users (and the attorneys involved) can begin soon.

For those unfamiliar, MacBooks introduced between 2015 and 2019 used a new low-profile keyboard with a “butterfly” switch mechanism that saved space but also resulted in firmer keys that moved less than they did before. Early complaints were mostly subjective and centered on the keyboard’s feel compared to previous scissor-switch designs. But as time passed, it became clear that butterfly-switch keyboards also failed at a higher rate than the scissor-switch designs. These problems persisted despite at least four major revisions to the butterfly-switch mechanism.

Although the company never admitted fault (and maintains, despite the class-action settlement, that it didn’t do anything wrong), Apple launched a repair program in 2018 that offered four years of free repair coverage to owners of all MacBook models with butterfly keyboards. Tellingly, this program covered all butterfly-switch MacBook models, including those that were introduced after the repair program was started, suggesting that the design was flawed in ways Apple could not address with hardware revisions. Apple re-introduced a modified scissor-switch keyboard in the 16-inch MacBook Pro in late 2019, and all MacBooks introduced since then have continued to use scissor-switch designs.

The settlement that was approved today resulted from a lawsuit that was granted class-action status in March 2021. If you live in one of the seven eligible states and you had a keyboard replaced through Apple, you should be contacted automatically about your payout, but you will be able to find more information at KeyboardSettlement.com when the site is live.

For users who are currently using a broken butterfly-switch keyboard, Apple’s Keyboard Service Program is still active, though the number of models it covers is slowly dwindling as time passes. The program “covers eligible MacBook, MacBook Air, and MacBook Pro models for 4 years after the first retail sale of the unit,” which at this point would mostly exclude the first wave of butterfly-keyboard Macs introduced between 2015 and 2017.